Rental with or without Skipper departing from Fajardo 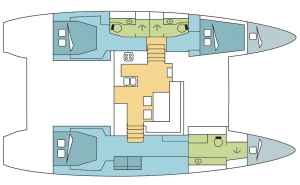 A very enjoyable and memorable week

We arrived at the base early to discuss and plan our week and meet our Skipper. We requested an earlier handover and managed to set sail around 3pm rather than spend the first night in the marina, This was very much appreciated. Our catamaran was well maintained and in good order. High spec level etc and everything seemed to be in good working order. Our Skipper Keino was very professional and really joined in with us. He quickly learned our preferences and then planned a trip to suit our needs. A boat's a boat, a Skipper's a Skipper, but the personality of that Skipper is very important and can make a huge difference to your experience. In fact our biggest concern prior to our arrival was our Skipper but Keino did a really great job in both taking care of us and making the week hugely enjoyable. We prefer to spend nights on anchor rather than moorings or in marinas and he found us some great locations each evening.....partly dictated by some poor weather conditions but always great fun. I'd have no hesitation in recommending this destination or operation and we're certainly looking forward to going back sometime in the future.