Embark on a coastal sailing course of 3 or 4 days in South Brittany. Whether you are a beginner or an experienced sailor, you will be welcome on board! Your crew, made up of 2 sailing professionals, is a real asset. These enthusiasts will listen to your expectations to help you progress at your own pace and in the best conditions. You will thus actively participate in the smooth running of the ship and in the community life on board. You will sail aboard a Challenge 67, an ultra versatile sailboat perfectly suited to coastal navigation.

Nothing better for learning to sail than to sail aboard a Challenge 67 of 21 meters. This old racing monohull designed to go around the world is very reliable offshore. It is equipped with two helm stations allowing you to have good sensations on both sides. Between both sides, you can relax in the saloon. It is spacious enough to accommodate all of its guests for a good meal. 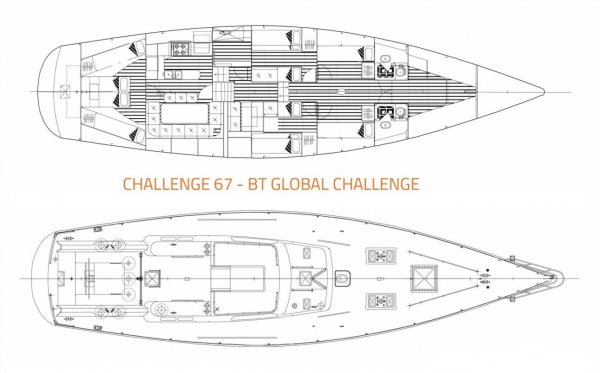 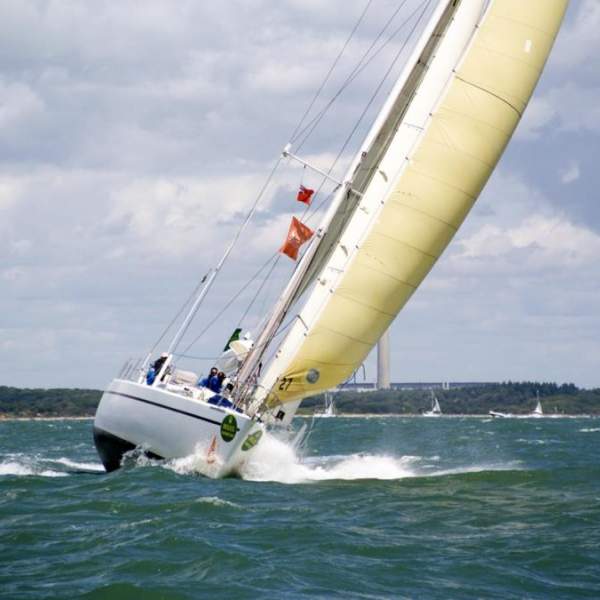 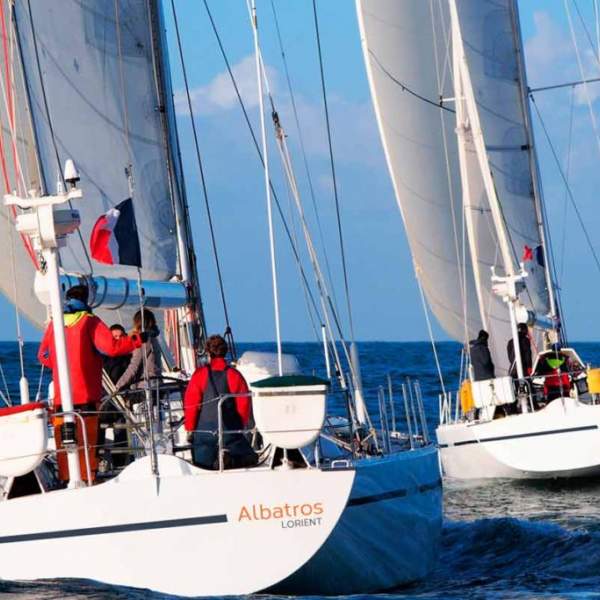 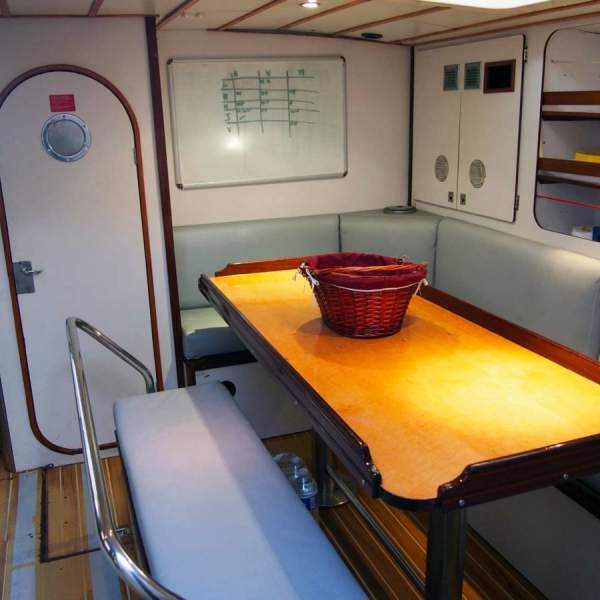 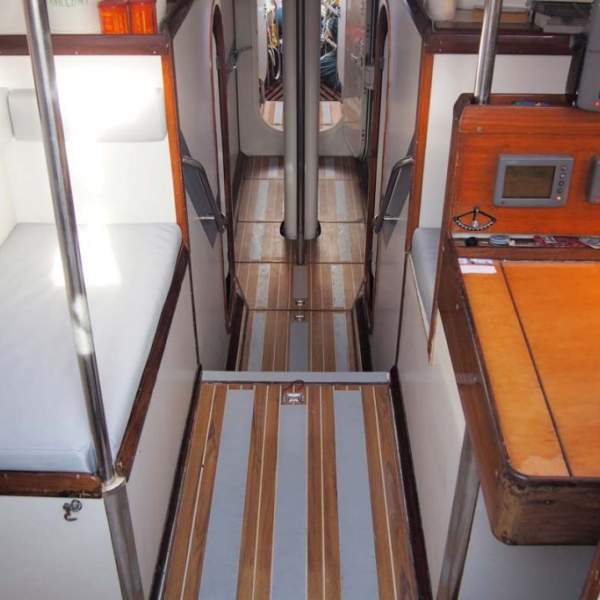 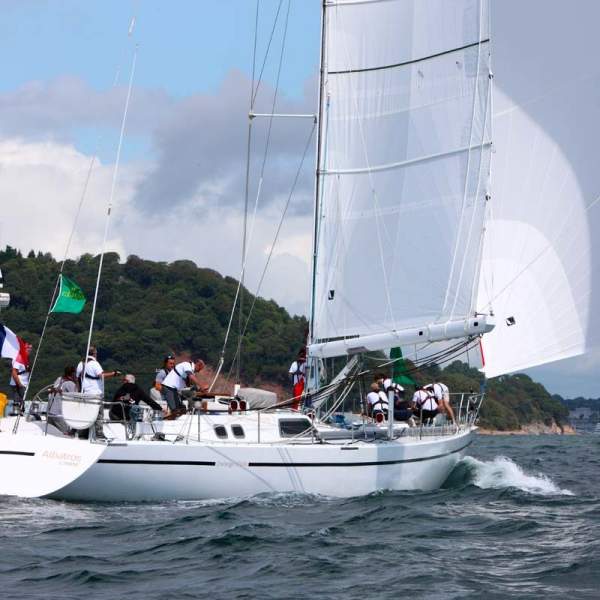 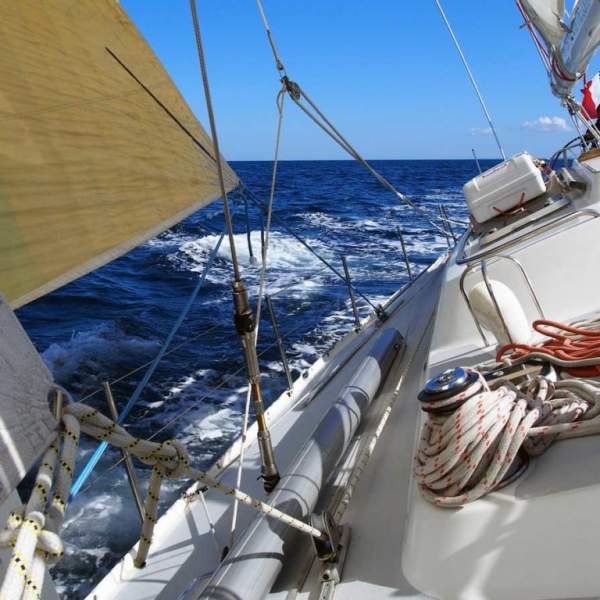 The boat is equipped with 4 cabins (2 doubles and 2 triples) with bunks and can thus accommodate up to 10 passengers. You will have at your disposal 2 bathrooms with a shower and toilet, to share with your team members and the crew.

The crew has 2 separate cabins. 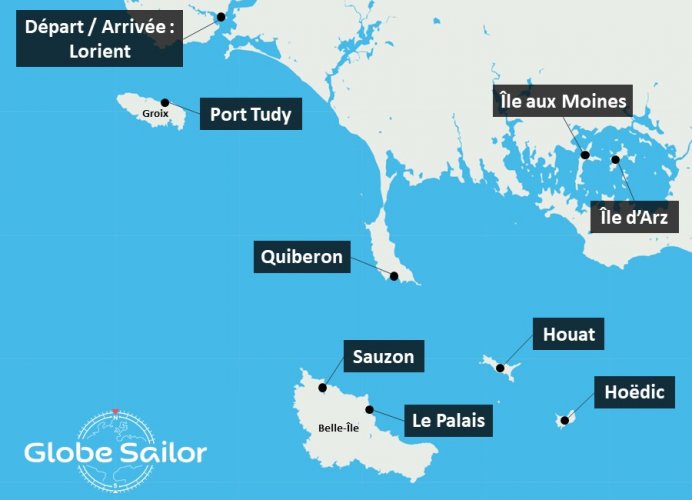 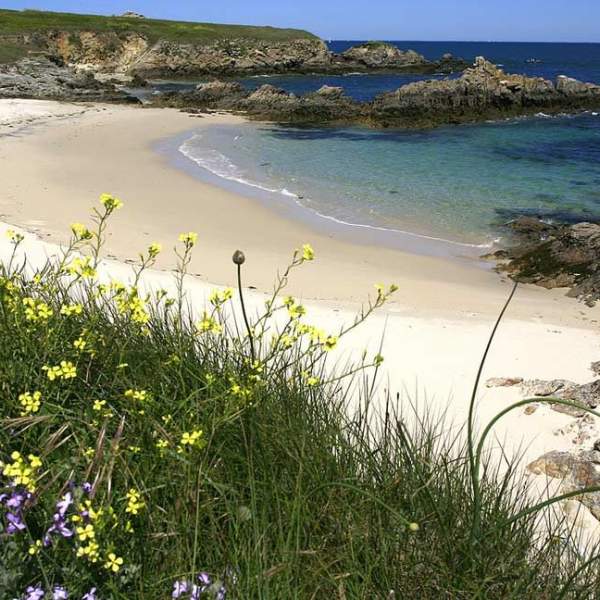 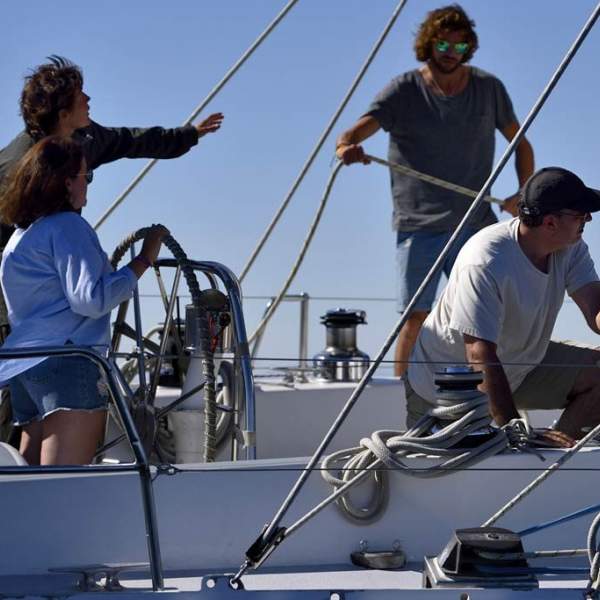 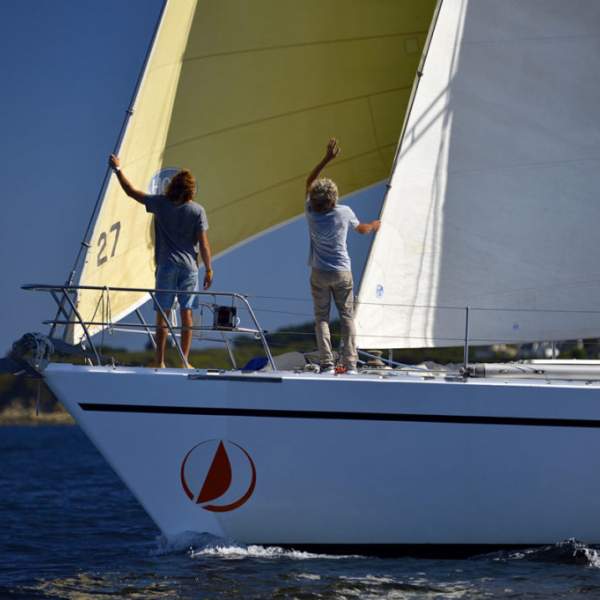 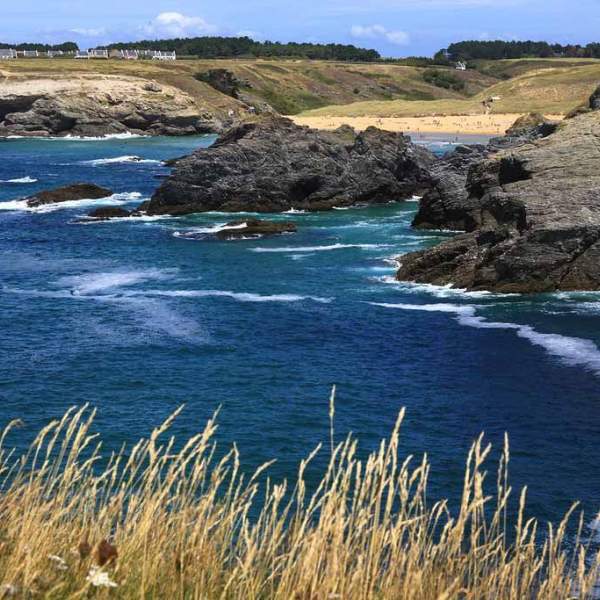 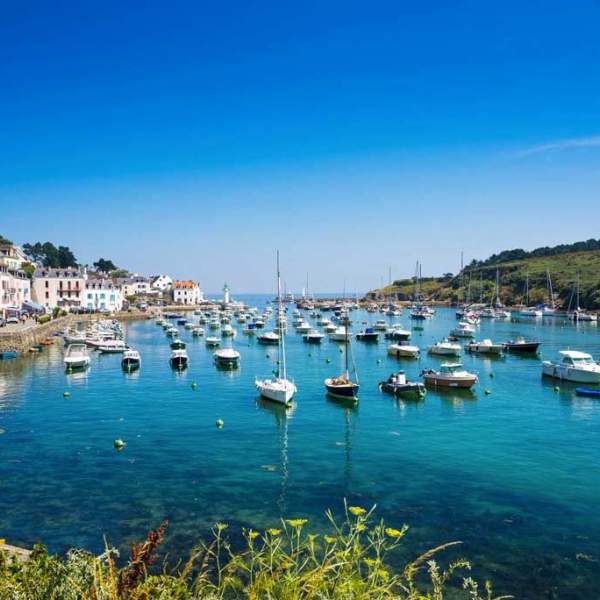 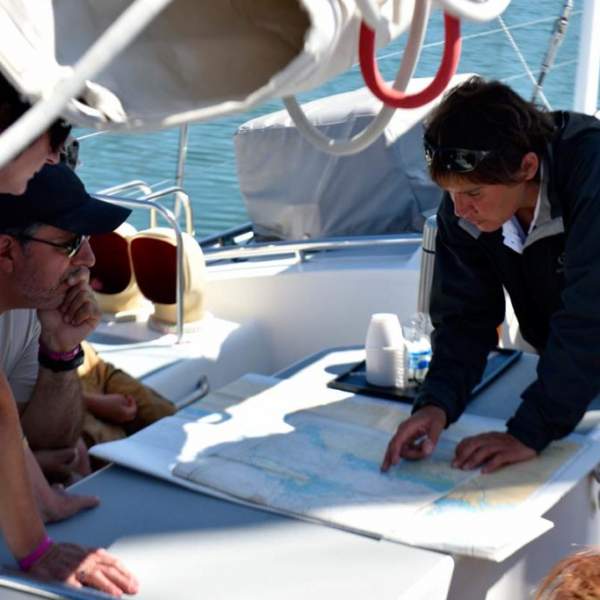 During your sailing practice, we will address several themes such as: vocabulary, setting the sails, taking the safe, port maneuvers... Obviously, the crew will adapt to each according to their knowledge and expectations. This participatory sailing excursion is the ideal program to discover life on board and participate in all the tasks (navigation, maneuvers, maintenance, meals...).

DEPARTURE: Lorient
The crew will meet you at 8am, at the port of Lorient, La Base. You will take the time to explore the sailboat with the skipper and meet your teammates over a coffee. After preparing the deck and listening to the safety briefing, it will be time to cast off. You will hoist the sails once you arrive in the harbor and head for the magnificent islands of the Gulf of Morbihan.

- Navigation in South Brittany -
It's time to put the crew's instructions into practice to gain autonomy and become a seasoned old sea bass.

Below is a non-exhaustive list of the stopovers you can make during your journey:

ARRIVAL: Lorient
Your return to the port of Lorient is scheduled for around 5 p.m.
We hope you enjoy this course and that it will peak your curiosity about sailing in other regions. Why not try the Mediterranean next time?

Contact us to receive the availabilities and prices for this offer
Price includes• Accommodation in a single bunk in a double or triple cabin
• Crew services: skipper and crew
• Full board
• Drinks
• On-board expenses
• Consumables for the boat
• Guaranteed departure from 5 participants
Price does not include• Transport to base
• FFV license (to be expected)
• Medical certificate to be provided
• Sleeping bag and personal equipment (to be provided or possibility to rent)

What happens in the event of a cancellation?

In the event of cancellation, you must notify your GlobeSailor advisor as soon as possible. Whatever the cause, the following cancellation fees will be due: up to 90 days before departure: 25% /// from 89 to 60 days: 50% /// from 59 to 30 days: 75% /// from 29 days until departure: 100% of the amount of your reservation.
We advise our customers to take out cancellation insurance with Ouest Assurance: http://www.ouest-assurances.fr

What are the requirements to confirm my reservation?

To confirm your reservation, you must inform your GlobeSailor advisor who will pose a time for you to collect your deposit. The reservation will only be considered final once your deposit has been received (by bank transfer, Paypal or credit card), of 30 to 50% of the amount of the reservation. A 100% deposit will be requested for any reservation less than one month before departure. The balance will be payable no later than 45 days before the embarkation date.

How are meals organized on board the boat?

Your sailing course includes full board (breakfasts, lunches and dinners). As for the organization and preparation of meals, we ask each participant to get their hands dirty.
Please let us know as soon as possible if you are allergic to certain foods or are on a particular diet.

Who are your trainers?

During your course, you will sail alongside a skipper holding the Captain 200 Sailing certificate and a second graduate of a State Patent.

To get to the Lorient base:
For people coming to the base by car, free parking is available near the base.

In which nautical establishment can I take my FFV license?

Note that the owner with whom you will be sailing is affiliated as a cruising school with the French Sailing Federation (FFV). As such, it is able to issue federal skills and titles within the framework of this activity to licensed persons practicing sailing. You can therefore go through him to get your sailing license if you do not have it yet.
Do not hesitate to let us know your decision at the time of booking.

Get a detailed offer by filling out the form below:

Who should we sent the quote to?