Explore the archipelago that inspired the English naturalist Charles Darwin
Galapagos Islands Tour
1 reviews
Departure Galapagos Islands (Ecuador)
Full board
8 days, 7 nights
You will love:
from
4 305 €
per person
Located in the middle of the Pacific Ocean, the Galapagos Islands form a volcanic archipelago of 19 islands. Its geographical position, at the confluence of 3 ocean currents has allowed its land and marine ecosystem to develop in an exceptional way. Today, this archipelago has become a unique wildlife observation site in the world. During your 8-day cruise, you will have the chance to see and approach species (turtles, sea lions, birds...) that have been saved thanks to the efforts of the local population and conservation programs.

The itinerary and the boat we propose are merely suggestions. We can, on request, propose shorter or longer cruises on board other types of boats.

Your boat, Archipelago I, is a motor catamaran 27 meters long and 11 meters wide. You will find the reception at the back of the main deck. Do not hesitate to ask the crew, who will be delighted to accommodate your requests. The large dining room can comfortably accommodate all the passengers. If you wish to relax in a quiet place, away from the warmth, the lounge is ideal for you.
Specifications 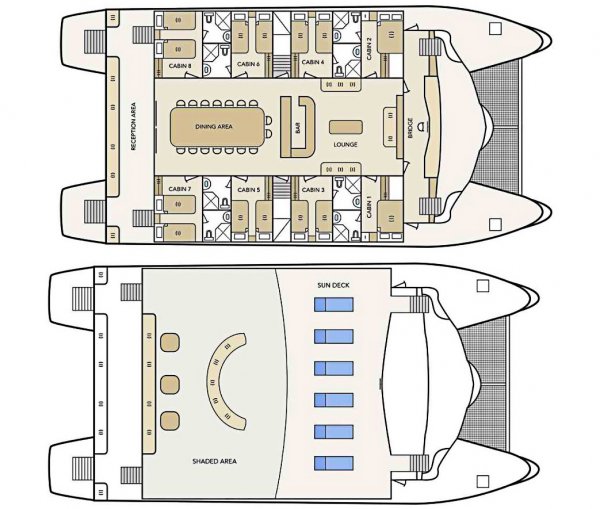 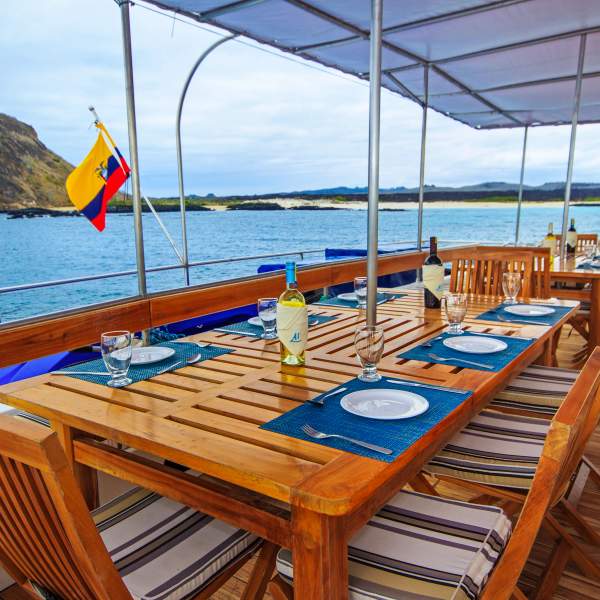 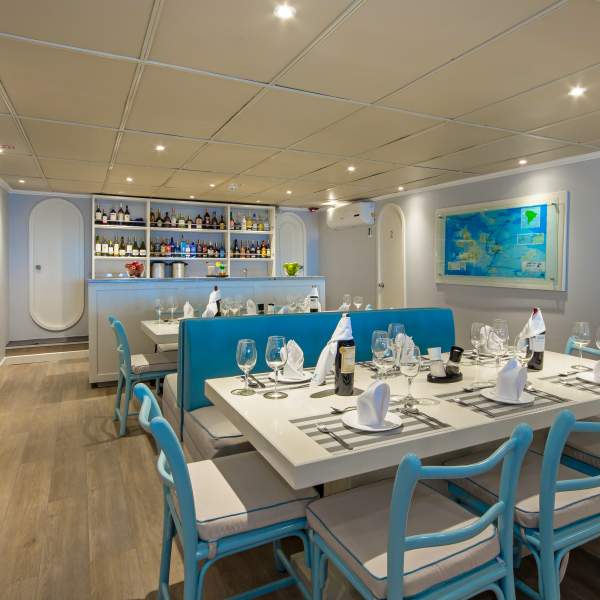 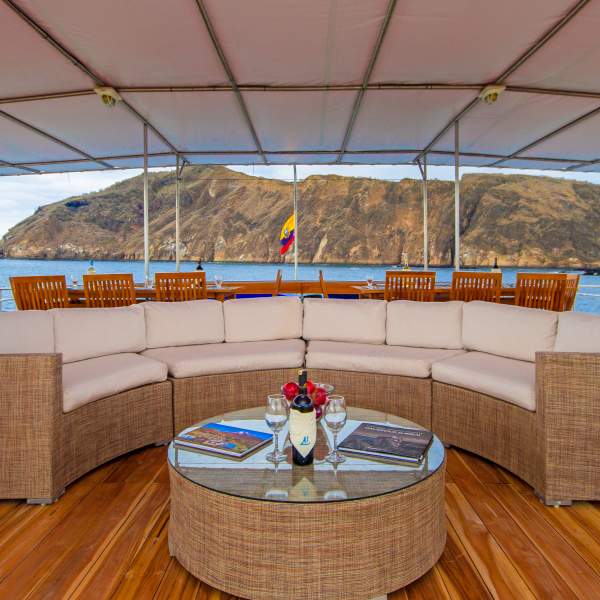 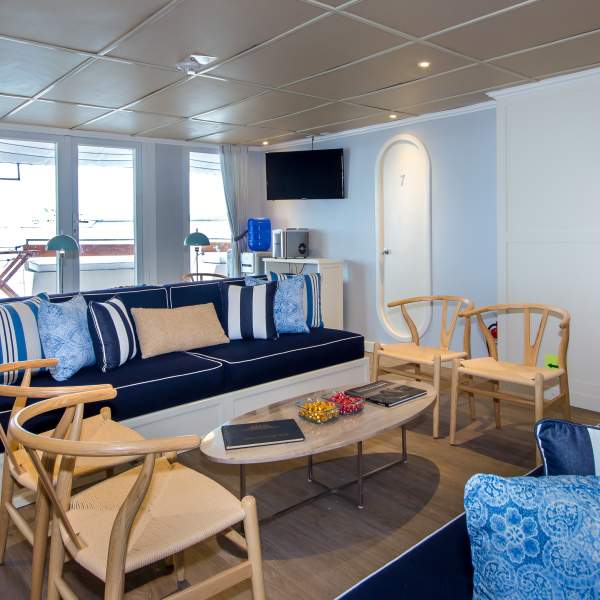 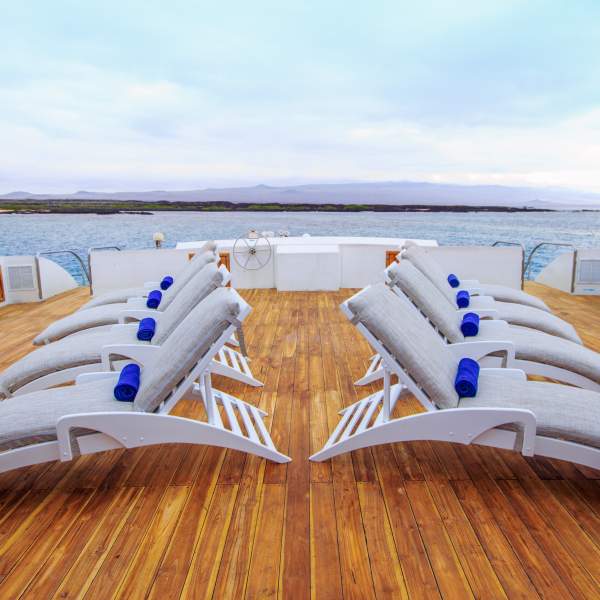 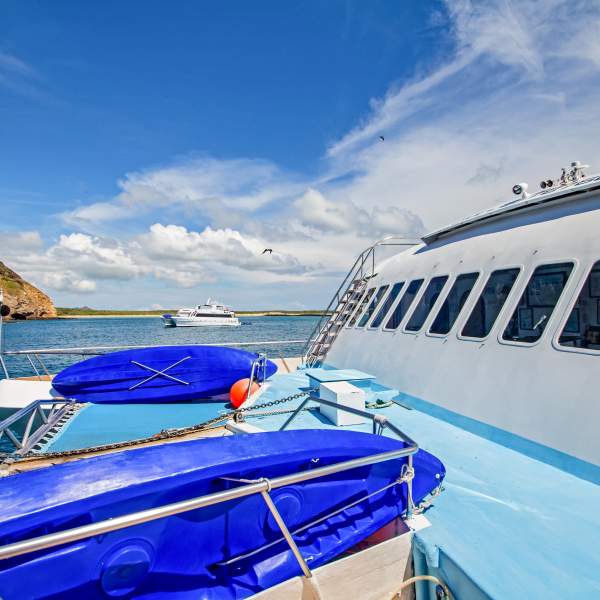 During your cruise, you will stay in a double or twin cabin with an ocean view. All cabins are equipped with a double bed or twin beds, storage space and a bathroom with private toilet. 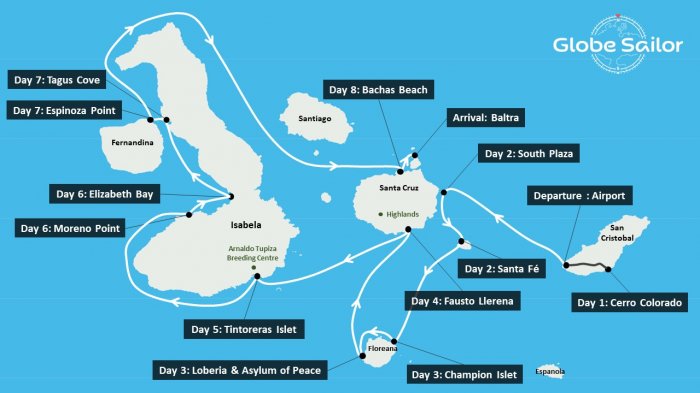 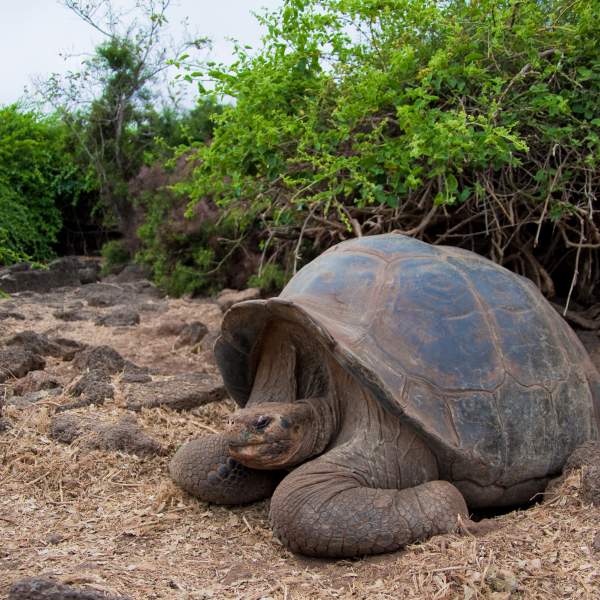 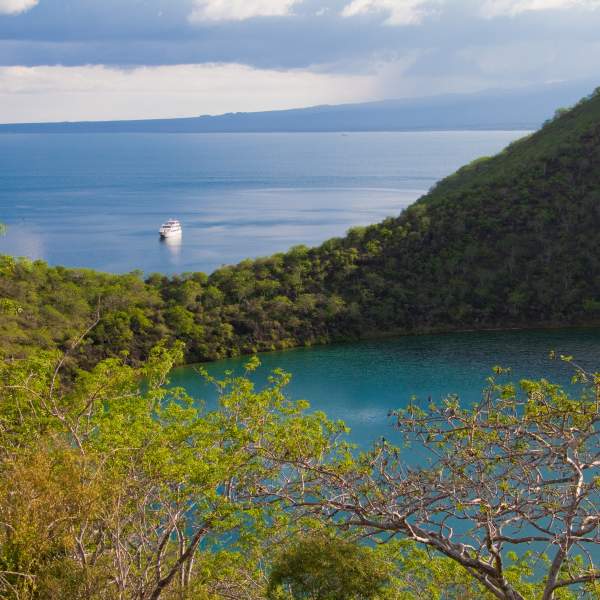 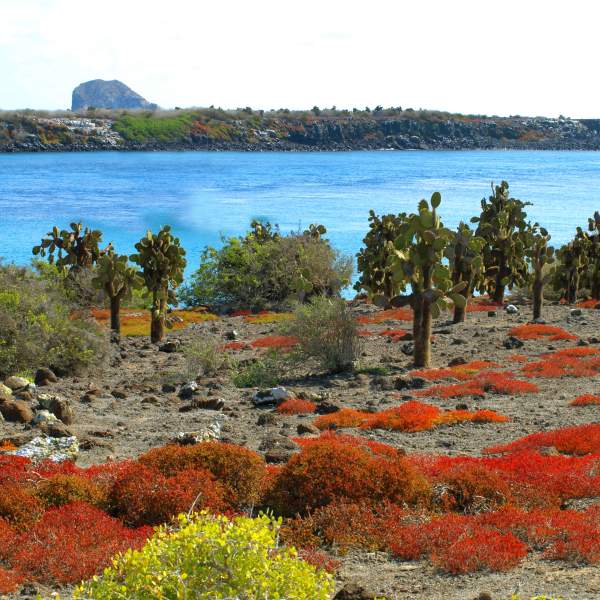 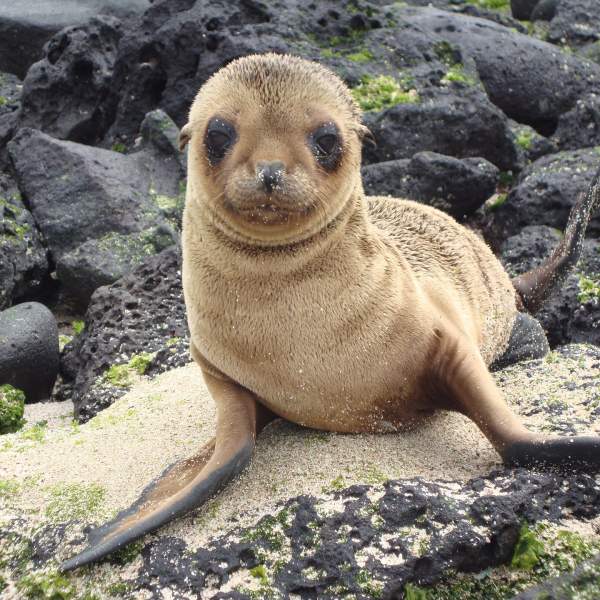 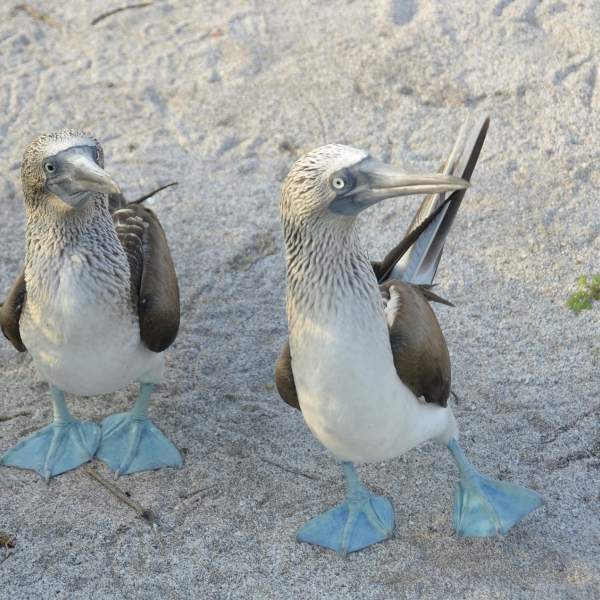 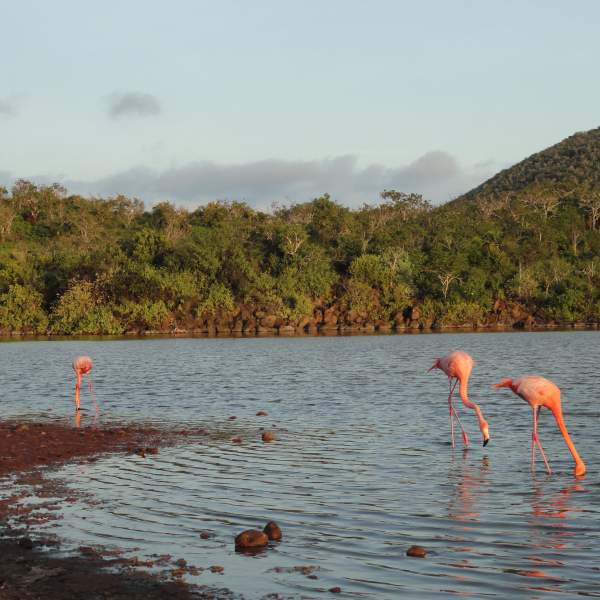 You will discover the most beautiful species of turtles and birds in the Galapagos. Night sailing allows you to extend your stopover time and thus make the most of the destination. With the full board formula, you can leave with peace of mind and enjoy delicious local specialities.
Itineraries of 4 and 5 nights are also available. They can be combined with a land-based stay in the archipelago or in Ecuador.
DAY 1: San Cristobal - Cerro Colorado (San Cristobal)
Upon arrival at the San Cristobal airport, you will go through a checkpoint to pay your Galapagos National Park entrance fee. You have an appointment at 1:00 pm, with a guide who will accompany you by bus to the Turtle Protection and Growth Center of Cerro Colorado. Thanks to its visitor access and interpretation trail you will be able to observe: indigenous plants, birds including the San Cristobal mockingbird and the yellow warbler. The bus will take you to the port of Chino where you will board the bus and take a seat in your cabin. Dinner on board and overnight at sea.

DAY 2: Plaza Sud - Santa Fe
You disembark at Plaza Sud, a small island east of Santa Cruz. Once ashore, you will be surprised to find so many plant and animal species in such a small area. You will meet land iguanas and hybrid iguanas (a cross between a marine and a land iguana) recognizable by their black colour. If you scan the cliffs, you may see fork-tailed gulls or brown pelicans. You will spend your afternoon in Santa Fe, an island of 24 km², which according to some theories is the oldest island in the archipelago. Here again, the fauna is diversified (iguanas, falcons, snakes, rice rats...). Along the coast you will also see sea lions. Dinner on board and night at sea.

DAY 3 : Champion Island - Loberia & the Asylum of Peace (Floreana)
Keep your eyes open during your crossing to Champion Island. It is common to see dolphins escorting the boat, sea lions doing some acrobatics underwater and even Pacific green turtles. After anchoring, the crew will take you to the shore in an inflatable dinghy to watch seabirds (blue-footed crabs, frigatebirds, red beaked phaetons...) but also Galapagos penguins. You will disembark on Floreana Island in the afternoon. We propose you a hike to the volcanic peak of the Asylum of Peace (450 meters above sea level). You will pass by caves formed by ancient lava flows. At the end of the day, you will take advantage of the magnificent beach of Loberia for swimming and snorkeling. Dinner on board and overnight at sea.

DAY 4: Charles Darwin Research Center - Highlands (Santa Cruz)
How would you like to learn more about the protection and conservation of Galapagos' biodiversity? In the morning, you have an appointment at the Charles Darwin Research Centre to discover the Van Straelen Exhibition Centre and the Turtle Breeding Centre. After lunch, you will head to the Highlands, located in the centre of Santa Cruz Island. You will pass through the Miconia agricultural area and then the Fern & Sedge area. Don't forget your camera to immortalize this landscape of volcanic hills. You will also visit the twin craters (Los Gemelos) and a local ranch to observe the Galapagos giant tortoise. Dinner on board and overnight at sea.

DAY 5: Tintoreras Islands - Arnaldo Tupiza Turtle Breeding Center
Welcome to the small Tintoreras Islands. A true refuge for wildlife. On your way, you may come across herons, penguins and sea lions. It is not uncommon to see white-tip sharks along the shore. You head back to Isabella Island, where you will visit the Arnaldo Tupiza Turtle Breeding Centre, which has saved several species from extinction. Indeed, in the 16th century, the archipelago was home to no less than 250,000 turtles, this number having risen to 3,000 in the 1970s. Today, there are more than 32 000 of them. During your excursion, you will undoubtedly be captivated by the baby turtles and their small size. Your day will end with the native botanical garden and the observation of brightly coloured birds (yellow warblers, vermillons...). Dinner on board and night at sea.

DAY 6: Moreno Point (Isabela) - Elizabeth Bay (Isabela)
You wake up in Moreno Point, a small and quiet place located between the volcanoes Sierra Negra and Cerro Azul. We take you on a walk along a path formed by a lava flow (called Pahohoe). During your excursion, you will be able to try to identify the birds present near the mangroves. Back on board, the crew sets course for Elizabeth Bay. Upon arrival, you board a dinghy and set off to discover the Marielas islets and their penguin colony, the largest in the archipelago. Your journey continues near the red mangroves, where brown pelicans, sea turtles, sea lions, spotted and golden stingrays seem to have taken up residence. Dinner on board and night at sea.

DAY 7: Tagus Cove (Isabela) - Espinoza Point.
After setting foot on land in pretty Tagus Creek, you take a steep path to the cliff top and Lake Darwin. Formed inside a volcanic crater, the water of the lake is saltier than the sea. Don't forget your camera because, seen from above, the scenery is breathtaking! On the cliffs, you will discover graffiti left by whalers, bushwhalers and pirates ... In the afternoon, you will reach the Espinoza Point, located at the north-east of Fernandina Island. Marine iguanas are particularly numerous there. You can watch them swimming close to the coast. You will also see a species of cormorant that does not fly. Dinner on board and overnight at sea.

DAY 8: Bachas Beach (Santa Cruz)
This morning, you set foot on the beautiful Bachas beach. Its white and particularly soft sand is the result of the decomposition of the coral. For turtles, this environment is ideal for nesting. Behind the beach, you will find a small lagoon which serves as a refuge for pink flamingos and some migratory birds. The adjacent beach is home to two barges abandoned by the United States during the Second World War. You will be transferred to Baltra airport at around 8.45 pm.
Your stops:
San Cristobal > Cerro Colorado > Plaza Sud > Santa Fe > Champion Island > Loberia & the Asylum of Peace > Charles Darwin Centre > Highlands > Tintoreras Islands > Arnaldo Tupiza Centre > Moreno Point > Elizabeth Bay > Tagus Cove > Espinoza Point > Bachas Beach > Baltra
The itinerary may be changed without prior notice due to technical or weather conditions

What documents are required for your trip to the Galapagos?

French nationals must be in possession of a valid passport valid for more than 6 months after the date of return.
A tourist visa is not required for a tourist stay of 90 days or less (period calculated on a rolling 12-month basis).

This information is subject to change by the authorities of the country visited. It is not uncommon for border crossing rules to change. We therefore strongly advise you to refer to the "travel advice" section of the France Diplomatie website: https://www.diplomatie.gouv.fr/fr/conseils-aux-voyageurs/.

Who's in charge of flights to the Galapagos?

Your international air tickets can be booked by the GlobeSailor team. Simply specify this to your consultant when booking your cruise.

Domestic flights to Galapagos from the mainland are optional but highly recommended. Indeed, these are the operating flights of the boat you are sailing on. Therefore, in the event of flight delays, the boat must wait for its arrival to dock.

How do the days on board work?

During the cruise your days will start relatively early, so that you can make the most of your stopovers.
You will wake up around 7am (unless certain activities start earlier).
After breakfast, you will go on an excursion with your guide.
Depending on the duration of your activities, you will return on board for a snack and relax before lunch. While you are having lunch, the boat will proceed to your next stopover (depending on the distance between sites).
Upon arrival, you will go ashore and enjoy your activities. You will be back on the boat for dinner.
During or after dinner, the catamaran will set sail again so that you will wake up the next morning in a new destination.

To be noted :
The itinerary and activities proposed in the itinerary are subject to change depending on weather conditions and local events.

How are meals organised on board the boat?

During your cruise, you benefit from the full board formula, including breakfasts, lunches and dinners. During the day, you will be free to help yourself to water, tea and filter coffee. Softs and alcoholic drinks are not included. Please check the terms and conditions of your quotation. Your consultant will be able to send you the menus proposed on board on request. They are often prepared with fresh, local produce. Please inform us as soon as possible if you are allergic to certain foods or if you are on a special diet.

Can I extend my stay in Ecuador?

The cruise we offer can be combined with a stay in Ecuador before or after your cruise.
Do not hesitate to contact us if you would like more information.

What are the payments to be made to confirm your reservation?

To confirm your booking, you must inform your GlobeSailor advisor who will make an option(hold) for you while you collect your deposit. The reservation will only be considered final once your deposit has been received (by bank transfer, Paypal or credit card), from 20 to 50% of the amount of the reservation. A deposit of 100% will be required for any reservation made less than one month before departure. The balance is due 60 days before departure at the latest.