Rental with or without Skipper departing from Horta 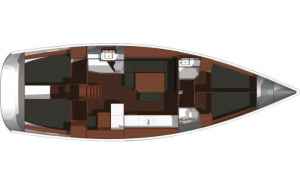 In May 2012 we had a sailing experience on Azores - a splendid archipelago of 9 beautiful islands. We chartered the boat with a young company of energetic nice people, which was the only one on islands at that time to provide for bareboat charter. The company offers brand new sailing boats of highest quality with all imaginable facilities (Dufour) for a rather reasonable price, which can be negotiated if the booking is early. What we liked very much apart from the impeccable service, was the scrutiny of the company on the safety issues. This is anyhow real ocean sailing, that's why security onboard is very important. The chartered boat had all the necessary lifesaving equipment and instructions, including the liferaft, and we were very carefully guided on how to use that. The company have their own reserved places in several marinas on islands, so we didn't have to pay for berthing, which was really nice.
I would like to thank all the staff for making our sailing holidays on divine Azores an unforgettable experience, at the same time not very expensive. The guys surely know and, which is more important, like what they are doing. Moreover, being professionals in their business, they value personal relations, and you are guaranteed to receive a warm family welcome.
All the best!