From Split to Dubrovnik, Discover the wonders of Dalmatia

A very comfortable cruise with a crew and a tour guide
Dalmatian Islands in a mini cruise ship
2 reviews
Departure Split (Croatia)
Half board
8 days, 7 nights
You will love:
from
1 400 €
per person
Embark for a week of cruising through the middle of the sublime Dalmatian islands. The program includes visits of the most beautiful Croatian cities (Hvar, Korcula, Dubrovnik...) with a passionate guide, discovery of the local cuisine, and a wine tasting. You will sail aboard a comfortable yacht, ideal to relax and admire the beauty of the Croatian landscape.

You will be aboard Avangard, a 50-meter-long luxury yacht with a high level of comfort on board. On the upper deck, the dining room is fully air-conditioned and can accommodate all the passengers. It also extends outside, offering a magnificent view of the islands. The bar area will be perfect for getting to know other passengers. You will be able to bask on one of the sun decks or enjoy a moment of relaxation in the jacuzzi. At the back of the boat, an access platform to the sea will facilitate your swimming outings.
Specifications 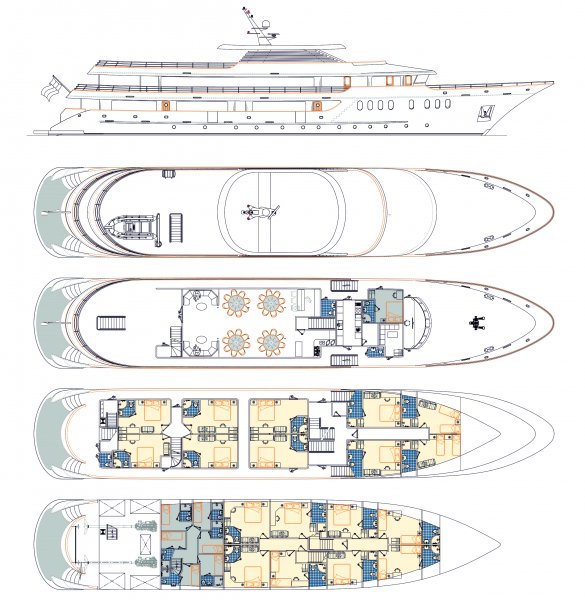 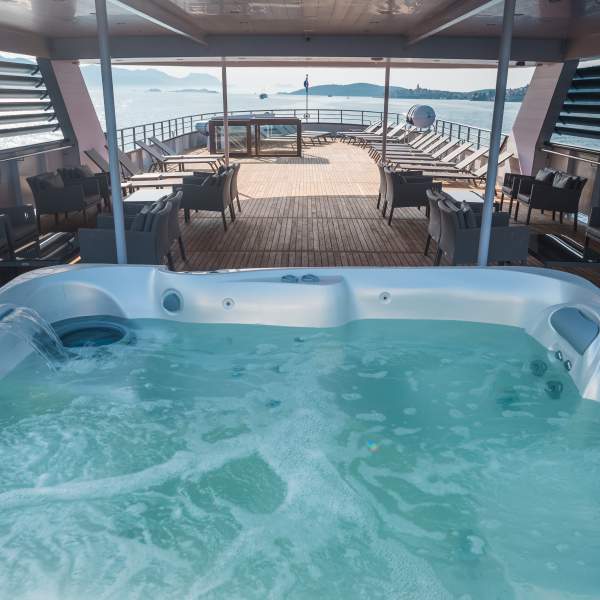 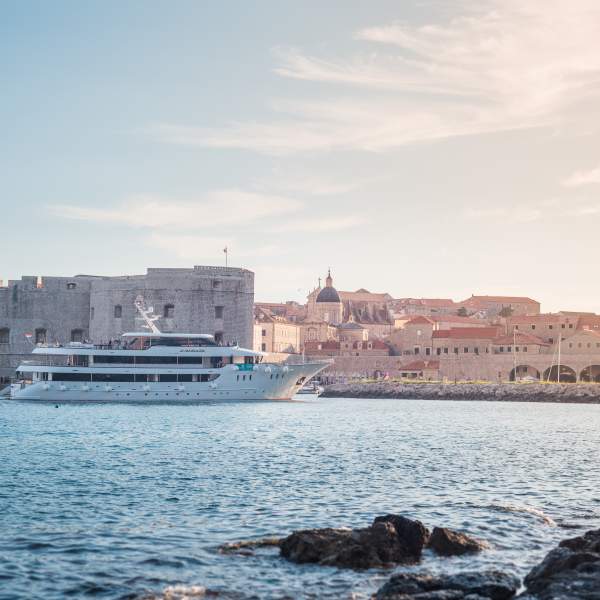 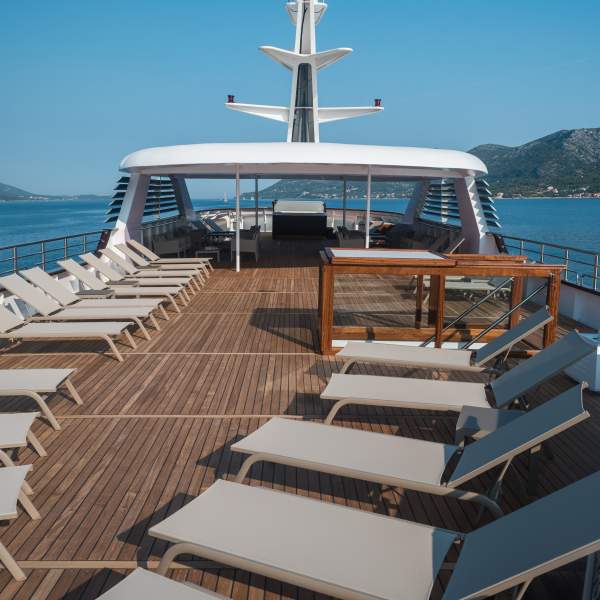 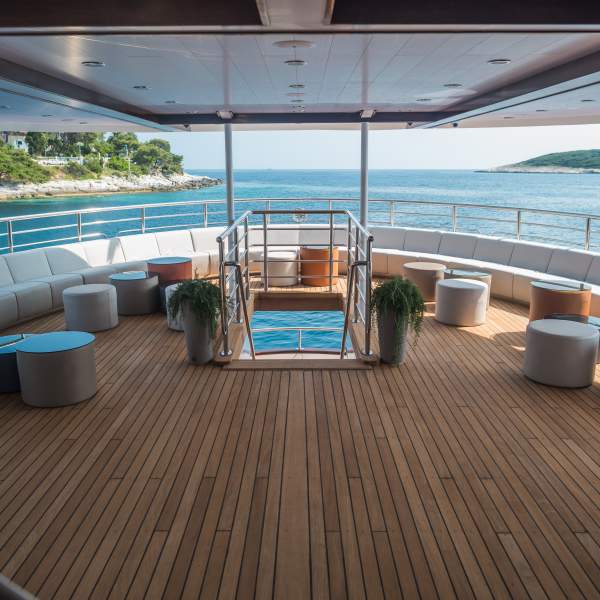 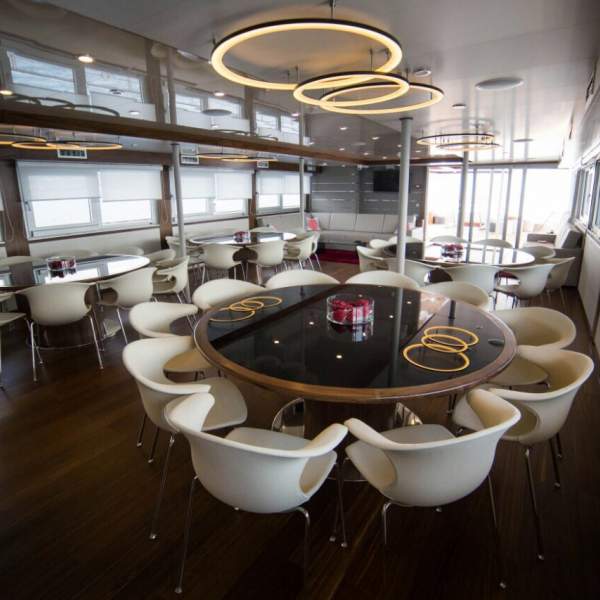 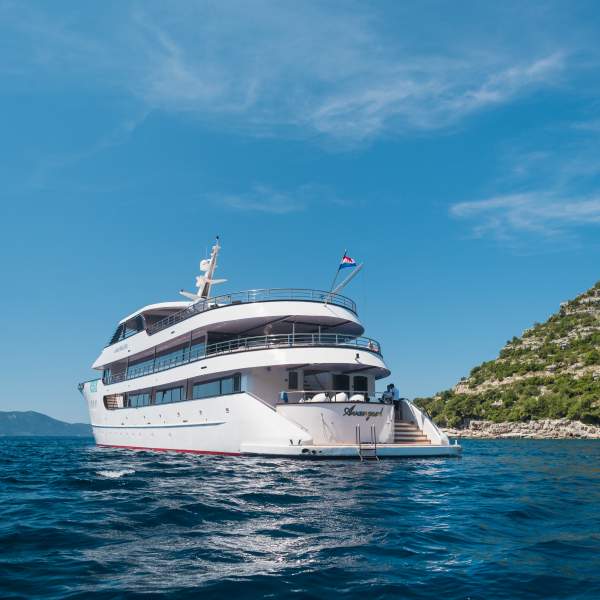 This yacht can accommodate 36 passengers in its 18 double cabins spread over 2 decks: 10 deluxe cabins (main deck) and 8 superior cabins (lower deck).
All cabins are air-conditioned and equipped with a double bed or two twin beds, a small safe, a hair dryer, a bathroom with shower, sink, and private toilet. 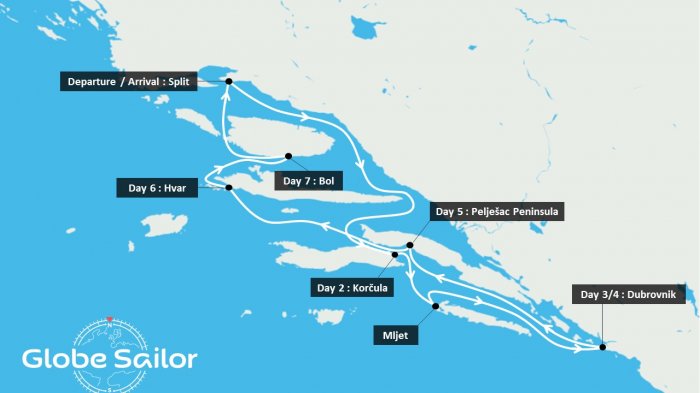 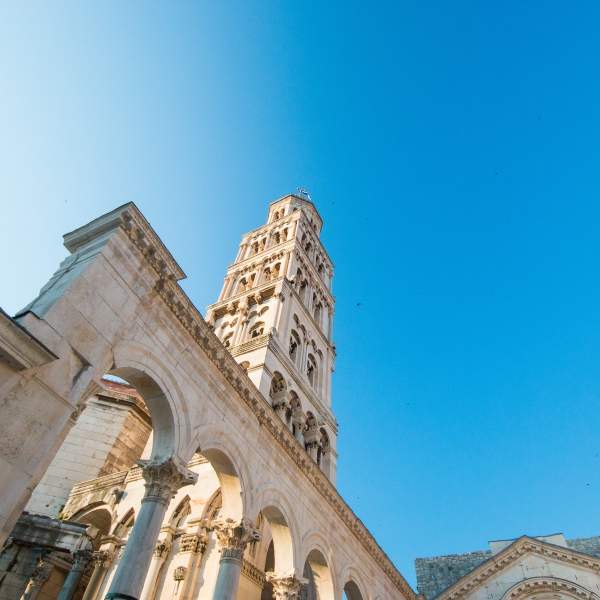 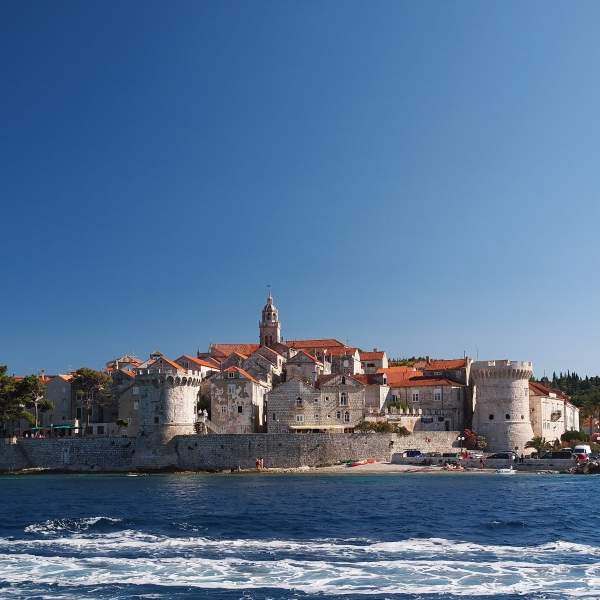 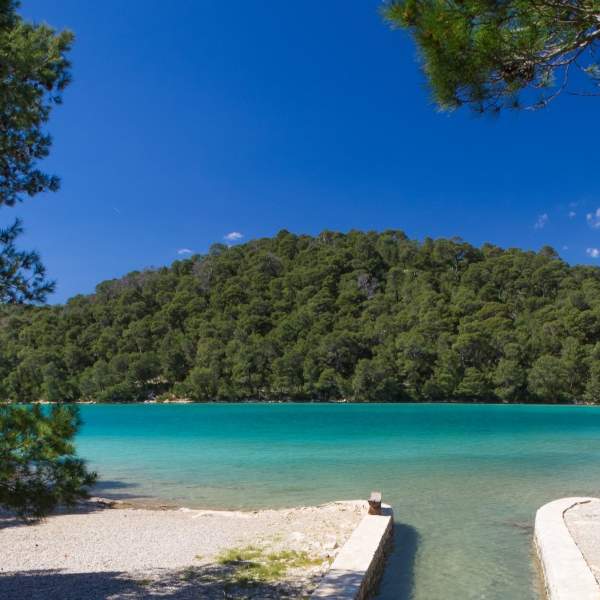 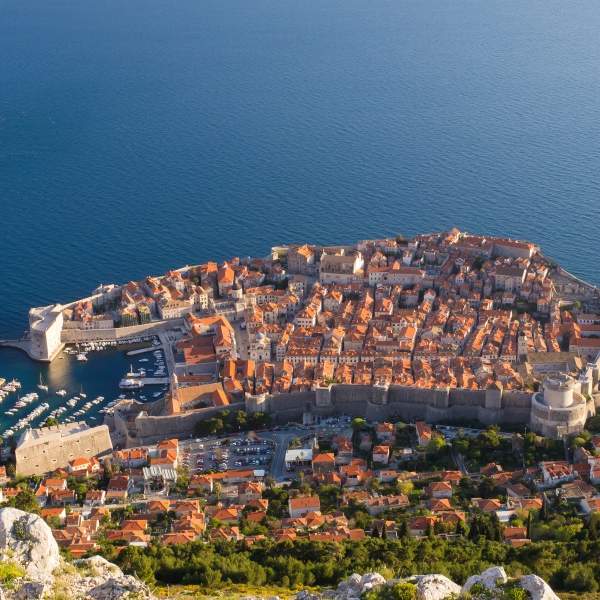 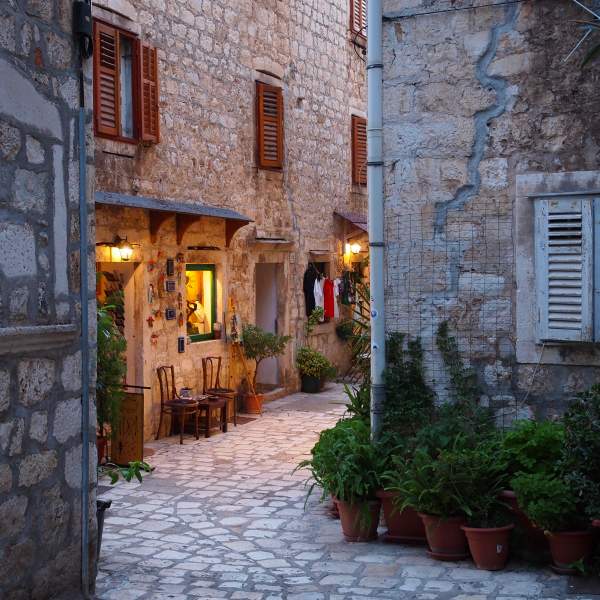 Spend a week aboard a top-of-the-line yacht to discover the Dalmatian islands with a caring crew and a passionate guide. Soon Croatia will have no more secrets for you...
Day 1 : Split
Transfer from Split airport to the Split harbor where the vessel will be docked. Check-in will be from 2pm onwards. After settling in, enjoy a guided tour of the city (not possible for late arrivals). The city of Split is a UNESCO World Heritage site. In Split there is an abundance of Roman architecture - most famous is the magnificent Diocletion Palace, once inhabited by the Roman emperor. Enjoy a meet and greet party on board on your first night. You can take this time to get to know your crew and fellow passengers over a welcome cocktail. Spend the night in Split.

Day 2 : Split - Korčula
Early in the morning, your yacht will depart towards the island of Korcula, the birthplace of Marco Polo. Have lunch in a secluded bay before arriving. In the early afternoon, you will follow a guided tour of the city. Stroll along the herringbone streets and discover the legends of this enchanting town. Korcula has an abundance of restaurant choices where your gourmet streak can continue. Spend the night in Korcula.

Day 3 : Mljet - Dubrovnik
This morning your captain will continue navigation to the south toward the island of Mljet. Take a boat trip in the famous salt lakes of Mljet National Park to St Mary's Island. On site, you will visit an ancient Benedictine monastery, an ancient abbey and a church that dates from the 12th century. Come back to the ship for lunch and then depart for Dubrovnik. Before docking at the port of Gruž, the captain will take you on a night cruise along the walls of the old town while a buffet dinner is served on the deck. Enjoy the spectacular views of this beautiful old town. Spend the night in Dubrovnik.

Jour 4 : Dubrovnik
After breakfast, you will transfer to the old town for a guided walking tour. Take the cable car from the old town to the Srđ mountain and enjoy panoramic views of the city walls and the Elaphite Islands. Afternoon free to find idyllic places for lunch and dinner. We recommend taking a walk inside the walls of the city, along the street "Stradun" or walking the famous walls of 1,940 m long. Spend the night in Dubrovnik.

Day 5: Dubrovnik - Pelješac Peninsula
Your cruise continues to the Pelješac peninsula, famous for its excellent wine. Before lunch you will make a short stop on one of the Elaphite Islands. Then, you will move to the inland coast to explore the rural areas. In the afternoon you will visit a farm in a local village. In the early evening, you will be invited to a Croatian village feast to taste some local specialties and dishes. Return late evening to the boat. Spend the night on the Pelješac peninsula.

Day 6: Pelješac - Hvar Peninsula
This morning, depart towards Hvar, the longest island of the Adriatic, also known for its lavender fields. Lunch on the small island of Šćedro followed by a stop to swim at the Pakleni Islands. Arrive in Hvar in the afternoon. While visiting the city you will find many historical monuments such as the Renaissance cathedral with its original tower and the oldest community theater in Europe, founded in 1612. Only the bravest will climb up to the fort to enjoy the panoramic view of the boat and the Pakleni Islands. For your free dinner, there is no shortage of restaurants, so do not hesitate to ask the crew for advice. Spend the night in Hvar.

Day 7 : Hvar – Bol/Milna/Pučišća
Your last stop will be in Bol, a picturesque village located on the island of Brač. You will be able to walk along the path that borders the coast or take advantage of its most beautiful beaches to swim. One of the most famous is the pebble beach of Zlatni Rat. At the end of the afternoon, you will taste local wines in one of the oldest cooperatives in Dalmatia. You will then be invited to the captain's farewell dinner. Entertainment on board. Spend the night on board at Bol or near Milna or Pučišća.

Day 8 : Bol/Milna – Split
Return to Split. Disembark before 9h00 and private transfer to Split airport.
Your stops:
Split > Korčula > Mljet > Dubrovnik > La péninsule de Pelješac > Hvar > Bol/Milna – Split
The itinerary may be changed without prior notice due to technical or weather conditions

What documents are needed to travel to Croatia?

For EU citizens, no visa is needed, just a valid passport.

How can I arrange my transfer from the airport to the boat?

After you have made your booking the base manager will contact you to give you more information on your cruise. Make sure you confirm what time you will be arriving and also your flight details. A taxi or minibus can meet you at the airport and bring you directly to the boat at an extra cost.

How do we organise meals on board the boat?

Most of our cabin cruises include full board and the services of a hostess - cook. Alcoholic drinks are sometimes extra. Check the terms and conditions of your quote. Your adviser will be able to send you the menus proposed on board. They are often prepared with fresh and local products. Please inform us as soon as possible if you have any specific dietary requirements!

What happens if I need to cancel my cruise?

What does a skipper do? And what about a hostess?

All the skippers which we offer are qualified, have the necessary professional licenses and speak fluent English. If you have any particular demands regarding a skipper make sure to let us know.
The skipper is in charge of navigation and your safety on board. Feel free to try out some of the manoeuvres with him; he will be happy to teach you the basics of sailing.
Regarding sleeping arrangements, the skipper will sleep on board, either in a cabin or in the common area (saloon).
The skipper is not in charge of cooking or washing up. A hostess (or cook) will prepare your meals, clean the saloon area and the cabins and make sure the boat is kept tidy.

What payments must I make in order to confirm my booking?

To confirm your booking you should inform your GlobeSailor advisor who will put an option (hold) on the cabin for a certain time until we receive your down payment.
The booking will only be considered final once we have received your down payment (by bank transfer, Paypal or credit card) which is 50% of the total amount. A 100% down payment is required for any booking made less than one month before departure.
The balance should be paid to GlobeSailor no later than one month before boarding. Mandatory extras and options will be payable locally. Be sure to check with your advisor prior to departure.

Your cruise specialist
since 2008
Why cruise with us?
We have selected the very best boats, each with excellent crew members who will ensure you have a relaxing and unforgettable holiday! No sailing experience required: discover a different way to see the world, on board a boat with family or friends!