Learn to sail in the Mediterranean!

Points of sail, sail adjustments, manoeuvres, seamanship... South of France
Sailing course in the Mediterranean
2 reviews
Departure Bormes les Mimosas (France)
8 days, 7 nights
You will love:
from
1 150 €
per person
Embark on an 8-day coastal course in the Mediterranean basin! The coastline of the French Riviera is perfect for learning to sail and discovering the region. You will work out the itinerary with your professional trainer and set off (depending on the weather conditions) eastwards to Cannes and the Lerins Islands or westwards to Marseille and the Frioul Islands. Daily sailing will allow you to gain autonomy and acquire the fundamentals of sailing.

Your course will take place on board a powerful RM 1180, voted Sailboat of the Year 2020 thanks to its remarkable performance and innovative design! Its unique hull shape was inspired by ocean racing yachts.
You will be sailing on a twin-keel version, equipped with a carbon mast and a double steering wheel. On deck, the fittings have been carefully positioned to ensure smooth manoeuvring and optimum safety. RM has also focused on comfort on board! You will be surprised by the brightness and the common living space. All these facilities will allow you to learn sailing or improve your skills in the best conditions.

To note: on certain departure dates, this course can be operated on board a POGO 12.50 or a POGO 36.
Specifications 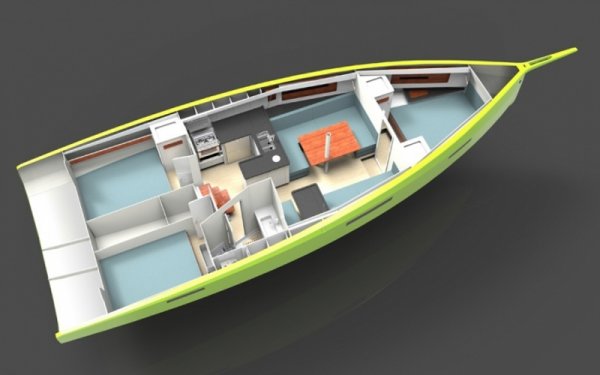 Protocol related to the Covid-19 health crisis:
This boat is meticulously cleaned by a specialised company that uses manually approved products made in France with a contact time of 15 minutes. You will find more details in the FAQ at the bottom of the page. 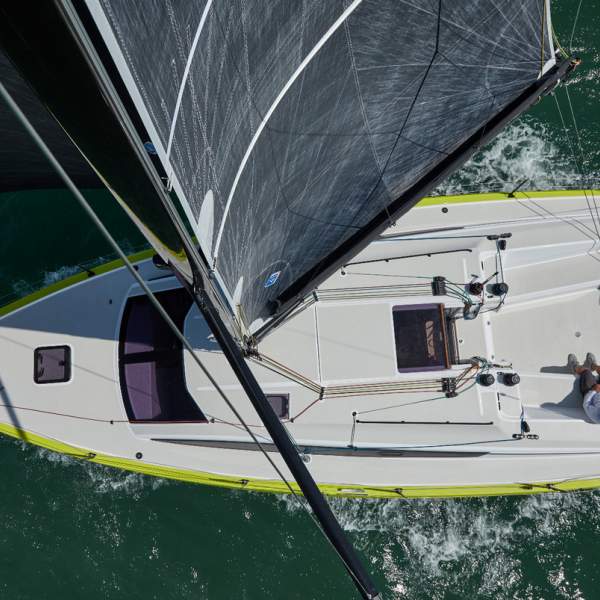 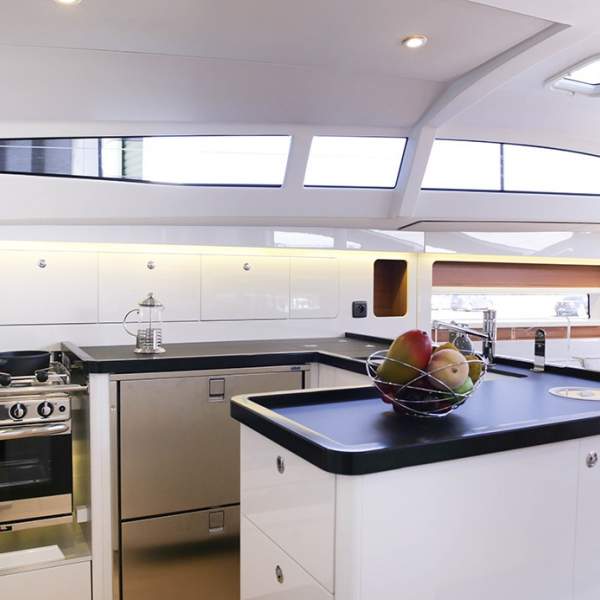 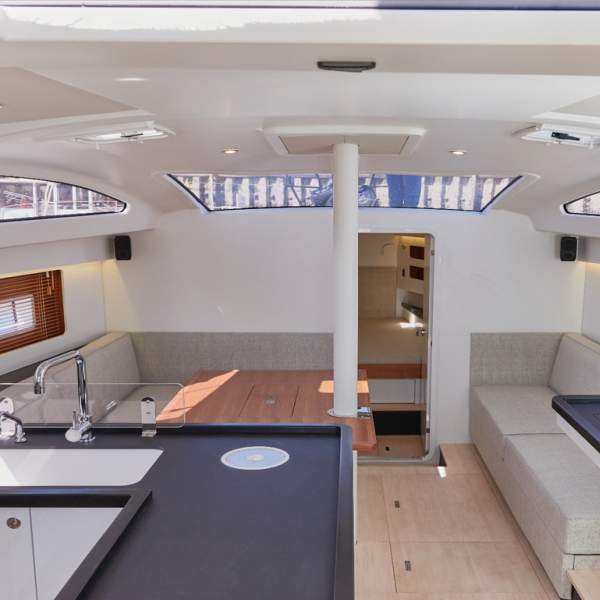 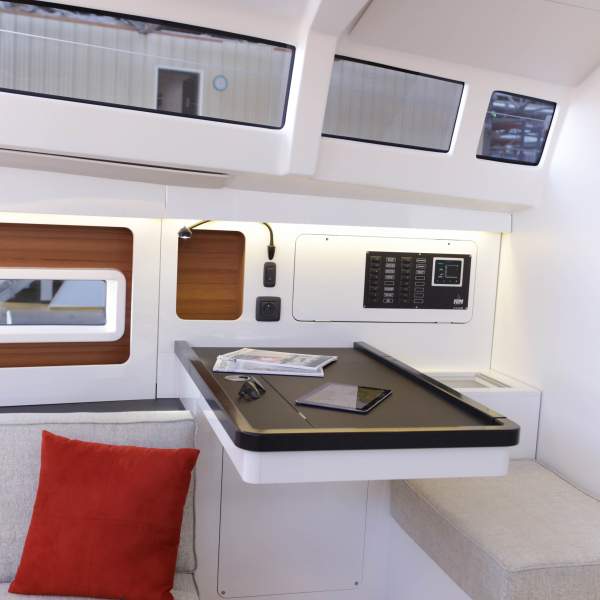 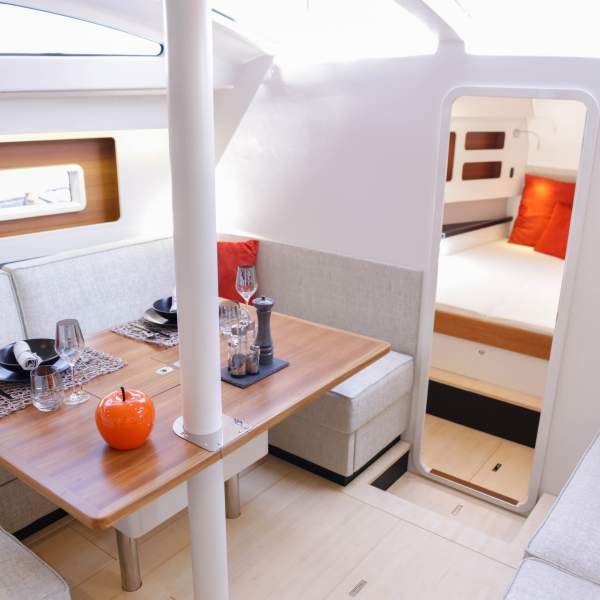 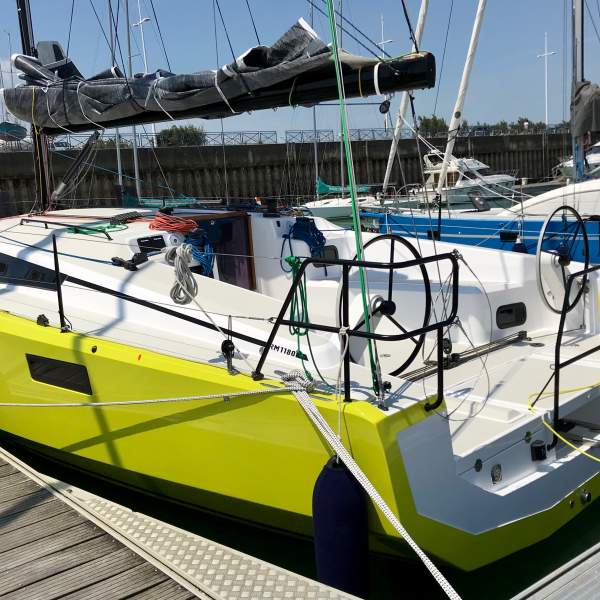 With its 3 cabins, this sailing boat can accommodate up to 6 passengers and 1 trainer. You will share your cabin with one of your crew members. A bathroom with toilet and shower is also at your disposal. 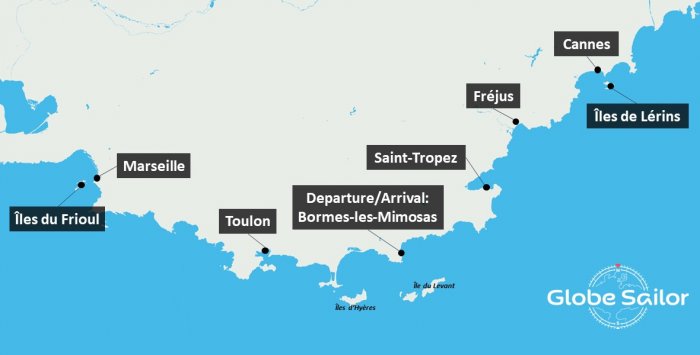 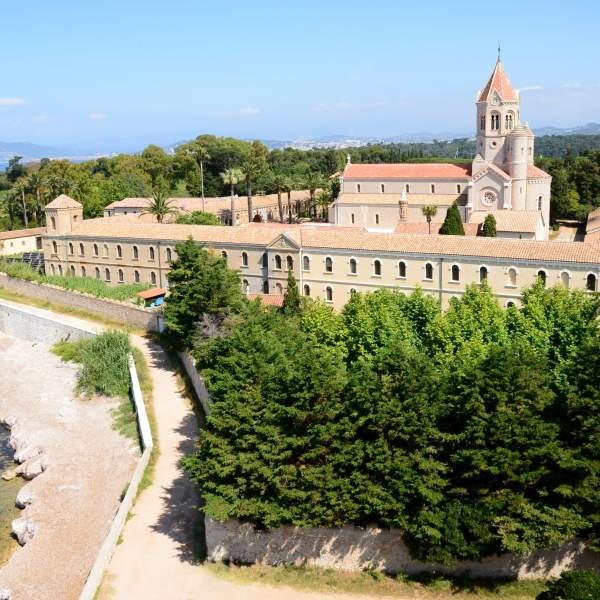 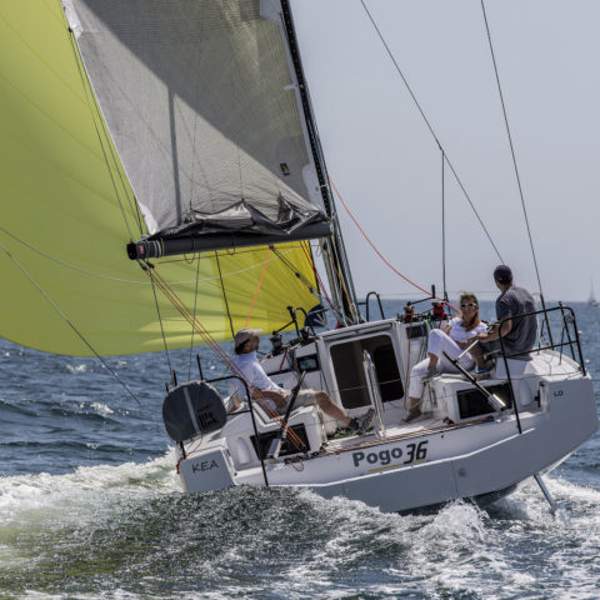 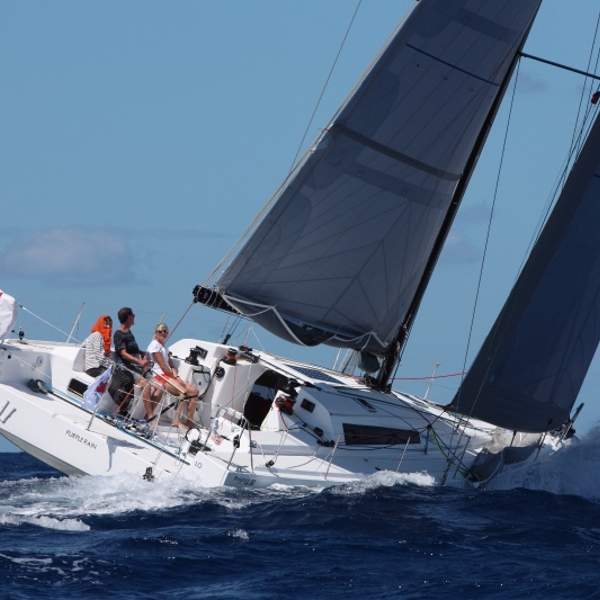 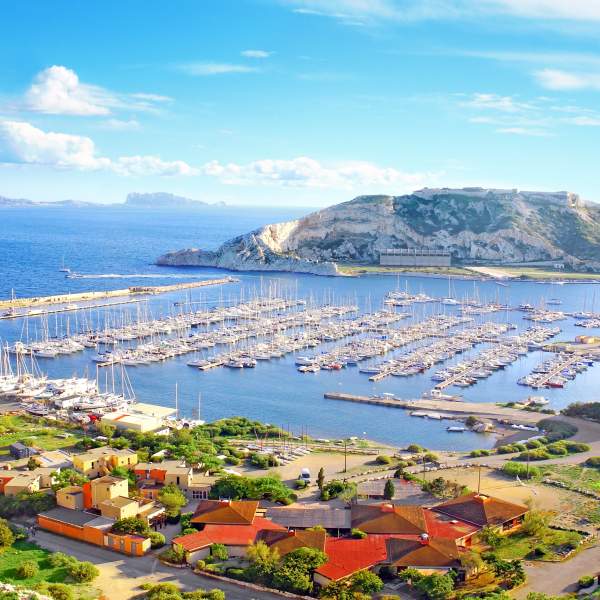 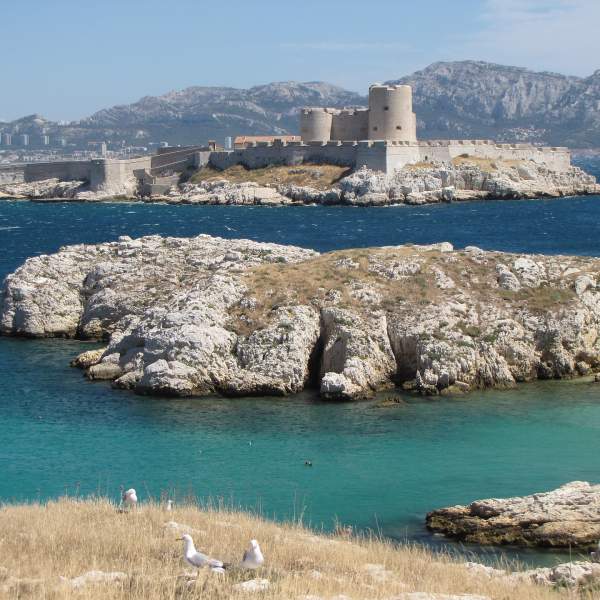 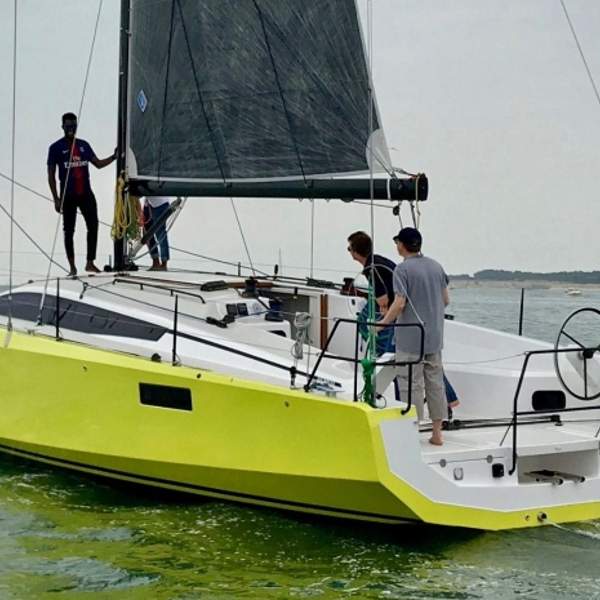 The Mediterranean basin is the ideal place to learn to sail amidst sublime landscapes. You will establish your programme at the beginning of the cruise, according to everyone's expectations and objectives.
DAY 1: Bormes-les-Mimosas
Meet at 4pm in the port of Bormes-les-Mimosas for your boarding. Once on board, you will meet your trainer and your crew members, and go around the boat. The skipper will present you with the different possibilities of stopovers according to the weather forecast. You will then discuss your course objectives: discovering the points of sail, perfecting your sail settings, revising port manoeuvres, etc.

DAY 2 to 7: Sailing
You hoist the sails and set course for your first stopover. This will be an opportunity to put into practice the various points discussed the day before with your trainer.

Below is a non-exhaustive list of the stops you will make during your crossing:


You could even sail all the way to Corsica if conditions permit... This little corner of paradise with a strong identity and turquoise water lined with beautiful beaches will seduce you as soon as you see it...

Price includes• Accommodation in a double cabin to share
• Services of the instructor (state qualified)
• Bedding (bed sheet and pillowcase)
• Boat insurance
• Cleaning at the end of the course
Price does not include• Transport to the base
• Board (food, stopover expenses) and consumables (water, gas, fuel): about 250€ /person
• "Sailing Pass" (French Sailing Federation Sailing Licence): 15€ per person (valid for the year of purchase - to be paid before departure)
• Sleeping bag or top sheet
• Towels and beach towels
• To be presented before the beginning of the course: a test (PCR or antigenic) less than 72 hours old or a vaccination certificate

What happens in case of cancellation?

In the event of cancellation, you must notify your GlobeSailor consultant as soon as possible. Regardless of the cause, the following cancellation fees will be charged: up to 90 days prior to departure: 25% /// from 89 to 60 days: 50% /// from 59 to 30 days: 75% /// from 29 days to departure: 100% of your booking.
We advise our clients to subscribe to a cancellation insurance with Ouest Assurance : http://www.ouest-assurances.fr

What are the rules to confirm my reservation?

To confirm your booking, you must inform your GlobeSailor consultant who will place an option for you while he/she collects your deposit. The booking will only be considered definite once your deposit has been received (by bank transfer, Paypal or credit card), of between 30 and 50% of the booking amount. A deposit of 80% will be required for all reservations made within 60 days of departure. The balance must be paid at the latest 45 days before the date of embarkation.

What is the cleaning protocol for the boat in relation to the Covid-19 health crisis?

All our skippers and sailing instructors are state-qualified, skilled and experienced. They are used to sailing on recent, high-performance RM and POGO yachts.

How are meals organised on board?

Provisioning is included in the amount of the ship's till. You will do your shopping in a supermarket located near the port.
You should expect to pay about €200 per person for the on-board checkout (this amount is given as an indication only).

COVID-19 : test and sanitary measures during your cruise :

In view of the current context, a test (PCR or antigenic) less than 72 hours before the start of the course or a vaccination certificate will be requested.
During your cruise, you must respect the following gestures:.

When sailing:
In the event of an infection, and while awaiting disembarkation, an infected seafarer will wear a mask as well as protective gloves and be isolated from the rest of the crew.