A perfect itinerary to discover the Dalmatian islands
Full Board Cabin Cruise in the Dalmatian Coast
Departure Dubrovnik (Croatia)
Full board
8 days, 7 nights
You will love:
from
2 000 €
per person
Bordered by the Adriatic Sea, Dalmatia is a historical region in southern Croatia. The captain and his crew will guide you for 8 days from Dubrovnik to Kotor (Montenegro), to discover the most beautiful historical and cultural pearls of the Dalmatian coast. Thanks to night sailing and full board, you will enjoy your stopovers to the full. Optional excursions will be offered on a regular basis to allow you to learn more about the cities visited.

Welcome aboard Callisto, a 50-meter long by 8-meter wide yacht equipped with stabilizers. Tastefully renovated in 2016, it offers a wooded decoration, accompanied by copper ornaments. Its 4 decks provide all the comfort and equipment necessary for an unforgettable cruise. Located on the main deck, the indoor and outdoor restaurants will welcome you to enjoy dishes with local flavors. If you are looking for a little quiet to relax or read, the library is for you. During your cruise, the sun deck will be the ideal place to admire the view or sunbathe on a deckchair.
Specifications 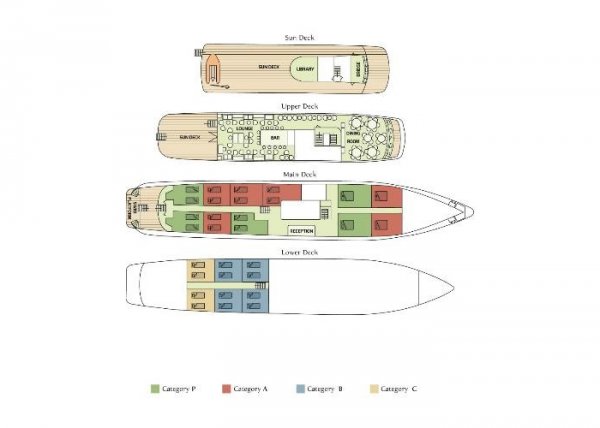 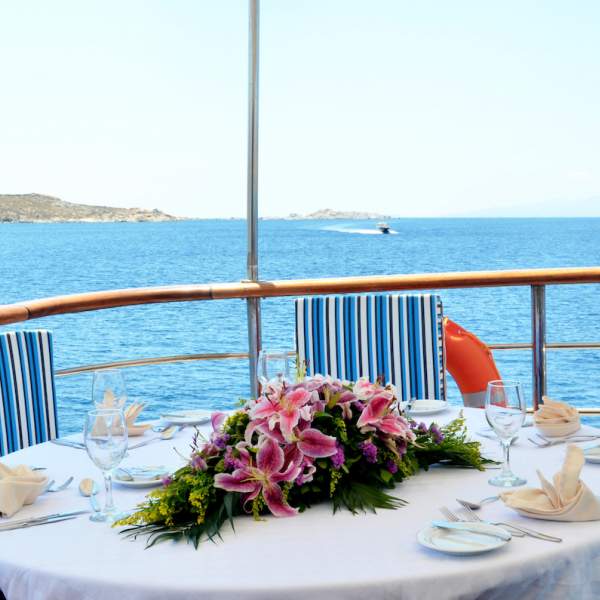 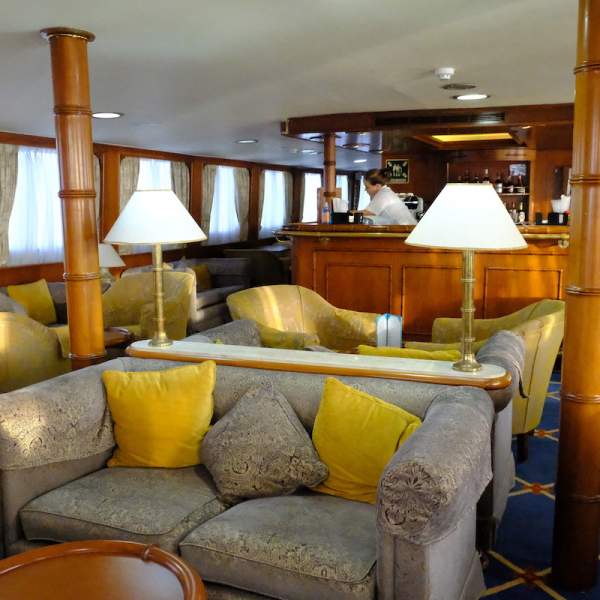 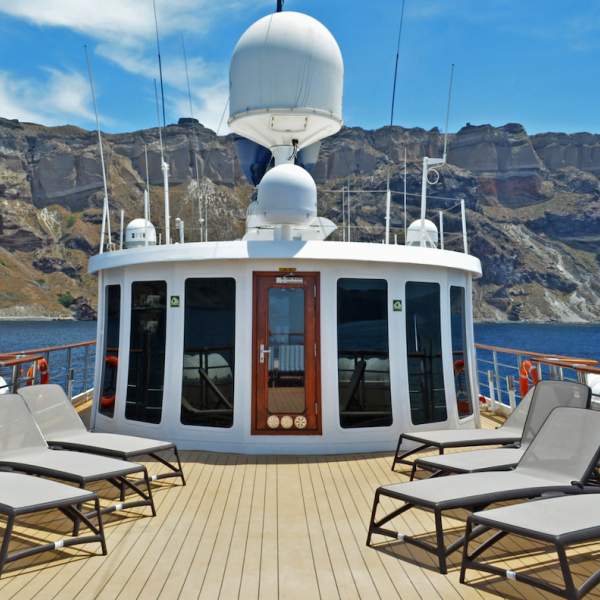 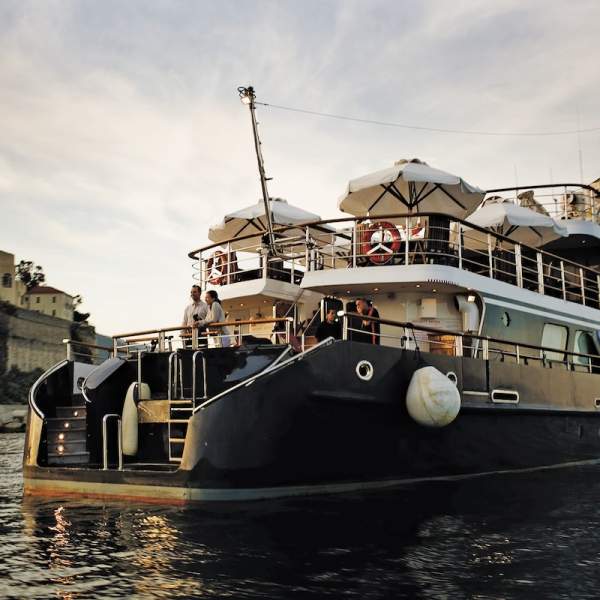 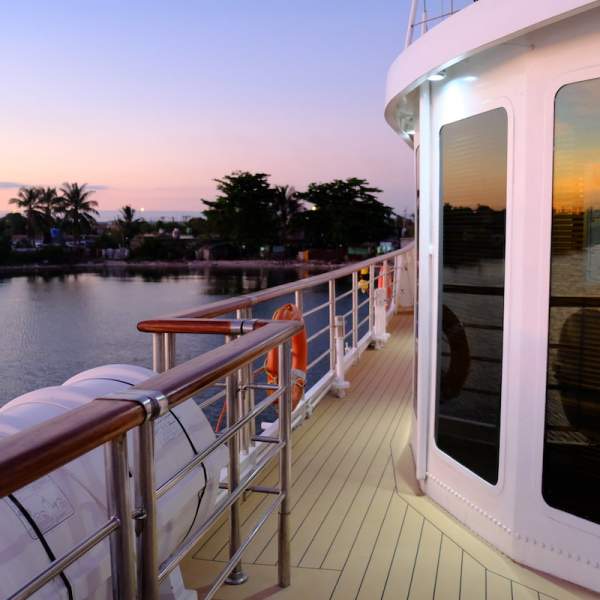 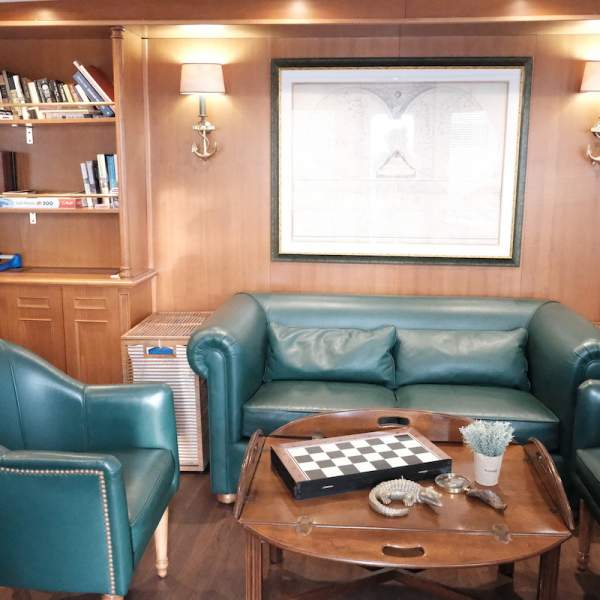 With its 17 cabins (5 P category, 6 A category, 4 B category, and 2 C category), the Callisto can accommodate up to 34 people. All cabins are air-conditioned (individually adjustable) and equipped with television, telephone (for internal use only), music, safe, mini-refrigerator, bathroom with shower, hairdryer and private toilets. 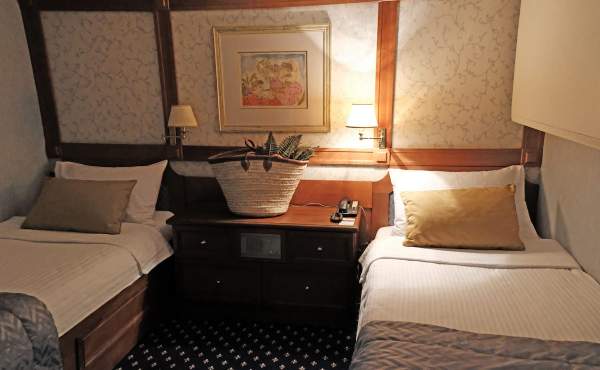 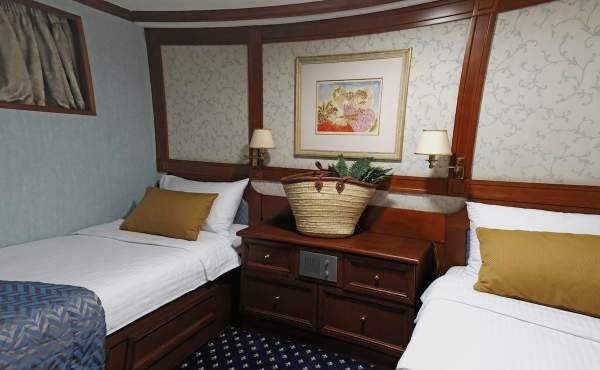 Double cabin - Category B
Located on the lower deck, these cabins are equipped with large windows and two twin beds. 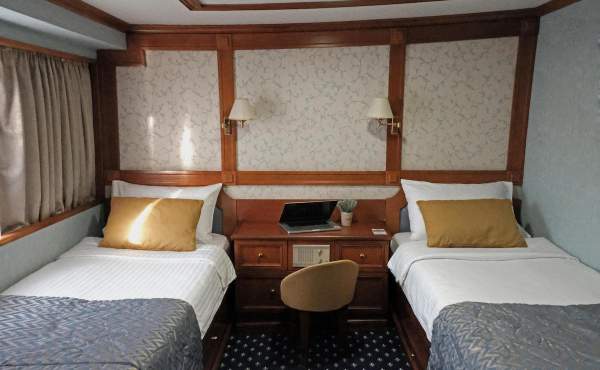 Double cabin - Category A
Located on the main deck, these cabins are equipped with a large window and a double or twin bed. 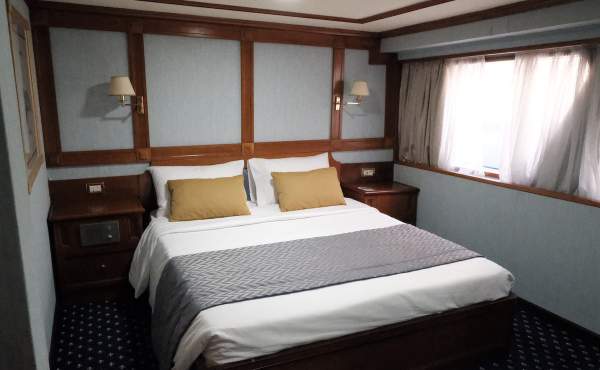 Double cabin - Category P
Located on the main deck, these cabins are equipped with a large window and a double or twin bed.
Note: Some category B & C cabins can be converted into triple cabins and can accommodate up to 3 adults. 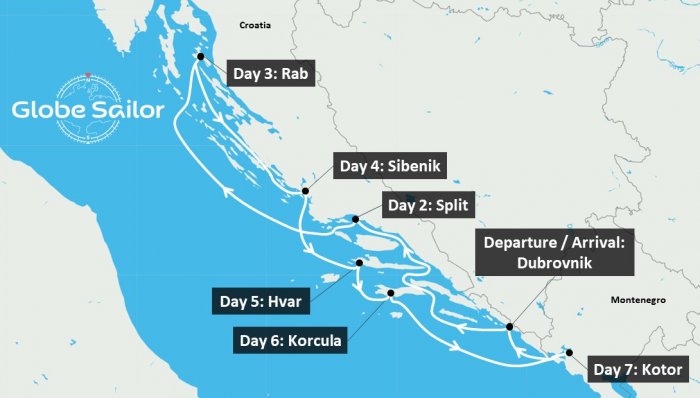 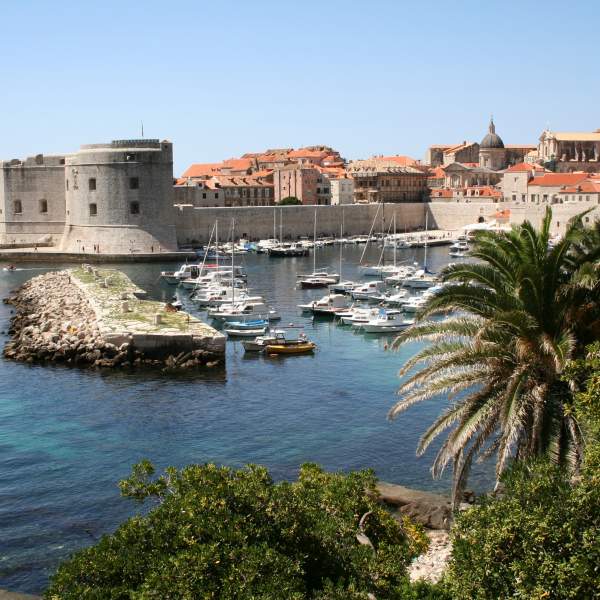 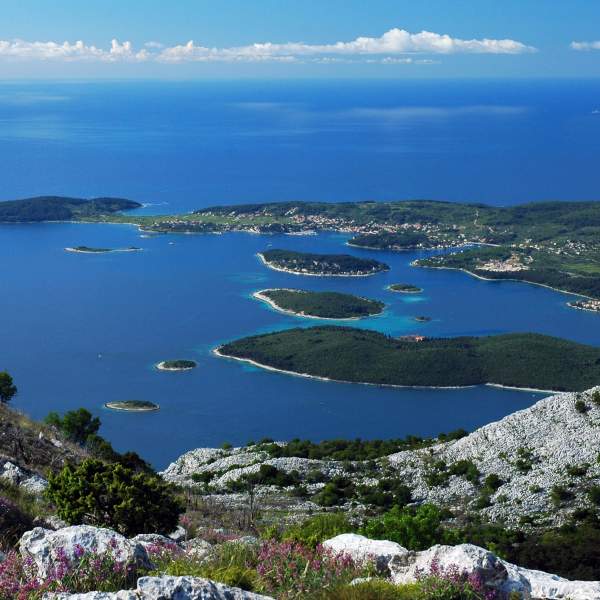 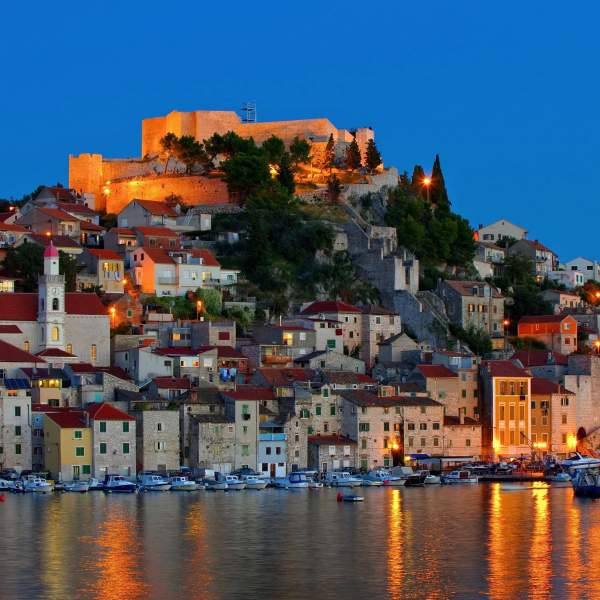 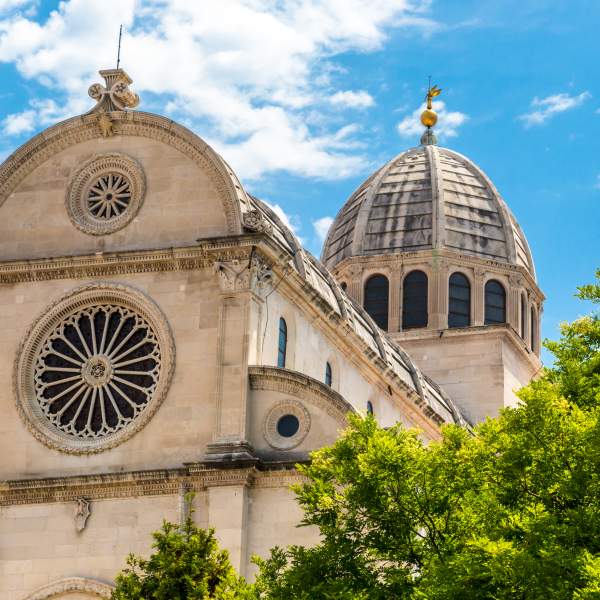 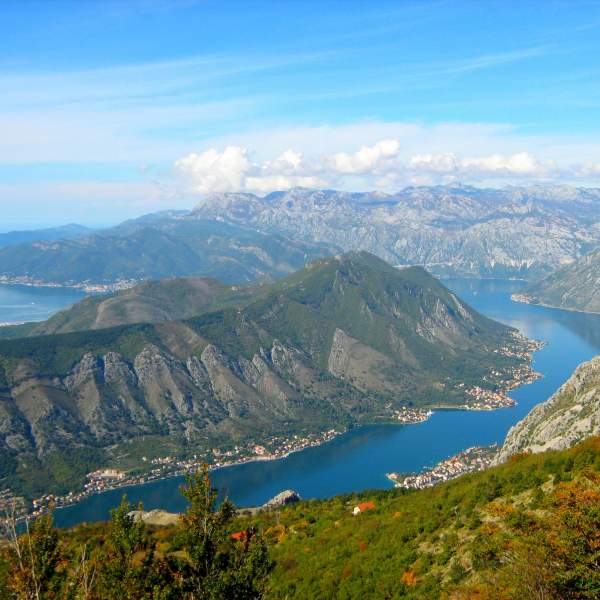 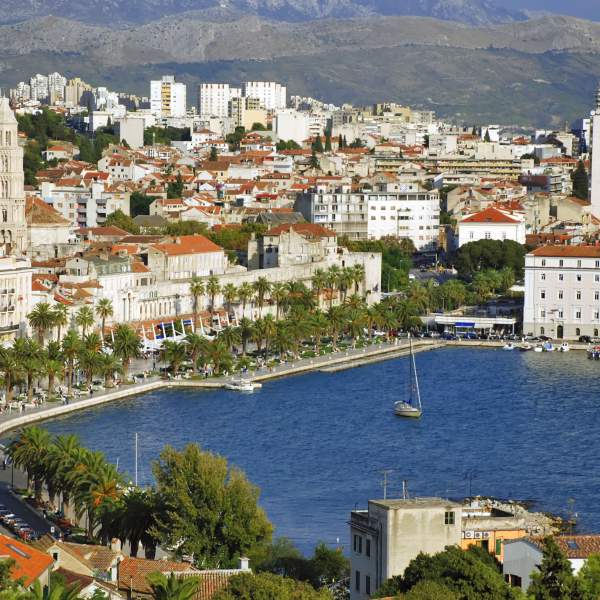 During your trip, each port and anchorages will have its share of surprises in store for you. Strolling through Korkula, Dubrovnik or Hvar, you will find medieval treasures. These stops will also allow you to discover the diversity of the Adriatic seabed.
Day 1 : Dubrovnik
Meeting in Dubrovnik between 3 pm and 4 pm for your boarding. The crew will introduce you to your cabin, and then you will have free time to explore every corner of the boat. In the evening, you will be invited to the restaurant to enjoy the welcome dinner. The captain will then give the order to cast off to Split. Overnight at sea.

DAY 2 : Split
You will dock Split in the morning. This city, with its heritage and fascinating history, is home to the sumptuous Diocletian Palace, built in the IVe century BC by the Roman Emperor of the same name. Those who wish can participate in an (optional) walk around the city accompanied by a guide. After lunch, we will propose you an excursion (optional) to Trogir. You will set sail again in the late afternoon and head for Rab. Dinner and overnight at sea.

Day 3 : Rab
This morning, you will make landfall on the island of Rab, located in the Kvarner archipelago. This city is known for its beaches but also for its many historical monuments. During the optional visit, you will have the opportunity to see the Sainte-Justine church, the remains of the Saint-Jean L'Évangéliste church, and the Prince's Palace. You will leave in the afternoon for the south. During this crossing, you will discover the Kornati. This archipelago, with its heavenly colors, includes 150 islands where calm and tranquility reign. Dinner and overnight at sea.

Day 4 : Sibenik
Before arriving in Sibenik, you will pass through the Luka Canal, bordered by mountainous landscapes. You will disembark in Sibenik in the morning. Located at the mouth of the Krka River, this city has many tourist attractions such as the Saint-Michel fortress built in the XIe century and the Saint-Jacques cathedral classified as a UNESCO World Heritage Site. The proximity to Krka National Park allows us to offer you an (optional) excursion to this lush place. Composed of waterfalls, the park has a very diversified flora and fauna. It thus includes no less than 45 species of mammals and 200 species of birds, including the golden eagle. Dinner and overnight at the port.

Day 5 : Hvar - Korcula
After breakfast, the captain sets the bar on Hvar. This island, with its venerable influences, is considered one of the most beautiful in Croatia, which makes it particularly popular with celebrities. You will have the choice between discovering the city for yourself or taking part in a guided walking tour that will take you to the Gothic cathedral of Saint-Etienne and its imposing bell tower. Back on board, you will enjoy a relaxing stopover to dive and refresh yourself in the Adriatic. Your journey then continues to Korcula where you will dock in its port in the late evening. Overnight at the port.

Day 6: Korcula
We have prepared a day trip (optional), led by a guide who will tell you the story of Korcula before taking you to the village of Lumbarda for a wine tasting. Korcula is a fortified city where the famous St. Mark's Cathedral was erected. Going up to the top of its bell tower, you will have a breathtaking view of the old town. A museum is also dedicated to Marco Polo, who, according to some, was born in Korcula... You return to the boat at the end of the day to set sail for Montenegro. Dinner and overnight at sea.

Day 7: Kotor - Dubrovnik
When you wake up early, you will be able to see the sumptuous and unforgettable Mouths of Kotor classified by UNESCO. This submerged canyon, too often described as a fjord, is wrongly composed of 4 gulfs: Herceg Novi, Tivat, Risan, and Kotor. You will stopover in the medieval town of Kotor and explore Place d'Armes overlooked by the 17th-century clock tower. The most courageous will climb the 1426 steps that lead to the top of the Saint-Jean fortress to admire the panoramic view of the bay. You sail back to Dubrovnik. You will dock at the end of the evening. Overnight at the port.

Day 8: Dubrovnik
It's time to pack your bags and say goodbye to the crew. Your disembarkation is scheduled after breakfast, around 9 am.

Note: Swimming stops in Croatia and Montenegro are subject to permission from local authorities.
Your stops:
Dubrovnik > Split > Rab > Sibenik > Hvar > Korcula > Kotor > Dubrovnik
The itinerary may be changed without prior notice due to technical or weather conditions

Price includes• Accommodation in double or twin cabins with private bathroom and toilets (in category P, A, B or C according to selection)
• English Crew Services
• Full board (from dinner on day 1 to breakfast on day 8)
• Welcome cocktail
• Captain's Dinner
• Beverages: water, tea, and filter coffee
• Snorkeling and fishing equipment (subject to availability)
• Guaranteed departure (from 12 participants)
Price does not include• Flights
• Round trip transfers between the airport and the boat
• Beverages: juice and alcohol
• Tips for the crew (15 to 18 € /day /person)
• Personal expenses
• Wifi connection (extra charge)
• Optional visits and excursions (to be booked and paid for on-site)
• Port taxes (350 € /person)
• Single supplement

How can I arrange my transfer from the airport to the boat?

After you have made your booking the base manager will contact you to give you more information on your cruise. Make sure you confirm what time you will be arriving and also your flight details. A taxi or minibus can meet you at the airport and bring you directly to the boat at an extra cost.

What documents do I need to for my cruise?

For EU residents, a valid passport or Id card is needed. Nationals of other countries should check with the consulate of their country of origin for information on formalities.

What documents do I need in order to travel to Croatia?

For EU residents, for stays of under 3 months you will just need a valid passport or ID. For non EU residents please check the Croatian Ministry of Foreign Affairs‘ website for visa requirements for Croatia. http://www.mvep.hr/en/

What payments must I make in order to confirm my booking?

In order to confirm your booking, you have to inform your GlobeSailor advisor who will put an option (hold) on the cabin for a certain time until we receive your down payment. The booking will only be considered final once we have received your down payment (by bank transfer, Paypal or credit card) which is 50% of the total amount. A 100% down payment is required for any booking made less than one month before departure. The balance should be paid no later than one month before boarding, either to the base or to GlobeSailor. Mandatory extras and options will be payable locally. Be sure to check this with your advisor or the base prior to departure.

What does a skipper do? And what about a hostess?

All the skippers which we offer are qualified, have the necessary professional licenses and speak fluent English. If you have any particular demands regarding a skipper make sure to let us know.
The skipper is in charge of navigation and your safety on board. Feel free to try out some of the manoeuvres with him; he will be happy to teach you the basics of sailing.
Regarding sleeping arrangements, the skipper will sleep on board, either in a cabin or in the common area (saloon).
The skipper is not in charge of cooking or washing up. A hostess (or cook) will prepare your meals, clean the saloon area and the cabins and make sure the boat is kept tidy.

What happens if I need to cancel my cruise?

Who is in charge of the air transport to Dubrovnik?

Your flight tickets are not included in your package. However, these can be booked by the GlobeSailor team. All you have to do is specify it to your advisor when you book your cruise.

Your cruise specialist
since 2008
Why cruise with us?
We have selected the very best boats, each with excellent crew members who will ensure you have a relaxing and unforgettable holiday! No sailing experience required: discover a different way to see the world, on board a boat with family or friends!