4 reviews
Tobago 35 (1995)
Calvi, Corsica (France)
4 reviews
Availability & Price
loading...
Price and availabilities upon request. One of our advisors will contact you shortly.

Rental with or without Skipper departing from Calvi 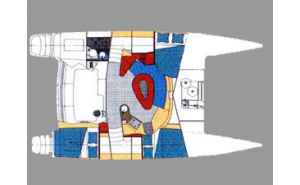 A dream come through.

Although communications with the renter started a bit complex (all the way from Holland to a busy manager), in the end everything turned out to be well understood and perfectly prepared.
The boat was in good shape and although very luxary (and probably over 6 tons heavy) it sailed amazingly fast (velocity up to 10 knots). We used the boat in relaxing weather (wind force 2-3 Bft), in perfect sailing conditions (4-5 Bft) and in heavy conditions (wind force over 7 Bft and waves over 2m). In all circumstances a pleasure to sail. And sailing we did! From Calvi to Bonifacio and also in the northern parts of Sardine.

We - 2 couples of which one with good sailing experience - have spent a beautiful week on this Lagoon 400 called Longo Maï. Of course this was also grace to the very pleasant, good English speaking and very skilled skipper Mr. Jean-Luc. Not only a professional captain, but also a good teacher, fine cuisinier and Sudoku connaisseur. In the week we spend together he became a friend.

It was an unforgettable week; a dream come through.

West of North Corsica, Calvi will charm you with its sunny climate, fine sandy beaches, mountains in the background and its beautiful citadel that proudly dominates the city. With is clear waters and beautiful seabed, Calvi is a paradise for divers and you will get to discover beautiful, well-preserved wild bays around. To make the most of your cruise around North Corsica, make a stopover in Calvi and go to the beaches of la Pinède, close to the Île Rousse, or to the beach of La Revellata.