2 reviews
Sun Odyssey 36i (2008)
Ajaccio, Corsica (France)
2 reviews
Availability & Price
loading...
Price and availabilities upon request. One of our advisors will contact you shortly.

Rental with or without Skipper departing from Ajaccio 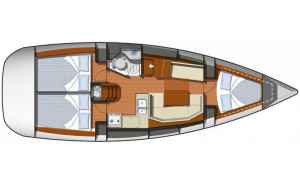 Welcome and checking in went fine.

Boat was fine apart from not working anchoring light which would not be fixed during 2week rental.

Outboard engine was problematic (runned only with chocke - no idle without) but can’t complain about because we didn’t complain until the end.

The sole thing that really spoilt the last day was that we were accused of damaging the keel in public, while the damage was already there on previous video. This felt really unprofessional, also because we relied on a checked keel from start.

As from now on, we won’t rent a boat anymore without the possibility of a full damage waiver.

On the west coast of Corsica, nestled in a gulf to the sheltered from the wind, Ajaccio is the marina par excellence. Native Land of Napoleon or even the resistant Danielle Casanova, the city is responsible for history. Ajaccio is a point of departure ideal for you venture off to the Sanguinaires islands who have no ceases to inflame the curiosity of seamen.