Rental with or without Skipper departing from ACI Marina Split 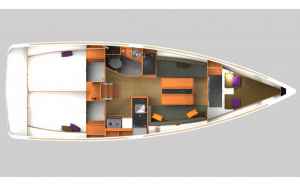 The boat was in perfect condition and as described. The nearby sailing area is varied and interesting, in particular the natural park at Mijet.

The only minor negative remark I have is that the charter company could do with some more trolleys to bring luggage to the boats. I think there is one only for their entire fleet, so either you are very lucky or you'll need to carry it yourself.

Dominated by the Romans, the venetians, the Austro-Hungarian and even Napoleon, Split offers a rich cultural heritage and tourist attractions! The ACI Marina in Split is open all year round, its long breakwater provides excellent protection from rough seas and southerly winds. Split airport acts as a great connection to the marina and is easy to reach from the highway.
With 318 berths and a number of qualified marina staff, it's a great place to stay and rent a boat from!

This tour will take you on a unforgettable trip around the best places neighbouring Split like: Hvar-Brac-Trogir and Vis. This is a 7 day tour of some of the most beautiful Islands in Dalmatia, and will sure to be entertaining for the entire family.